BOOK TOUR REVIEW: The Hands of Tarot by SM Blooding

The Hands of Tarot 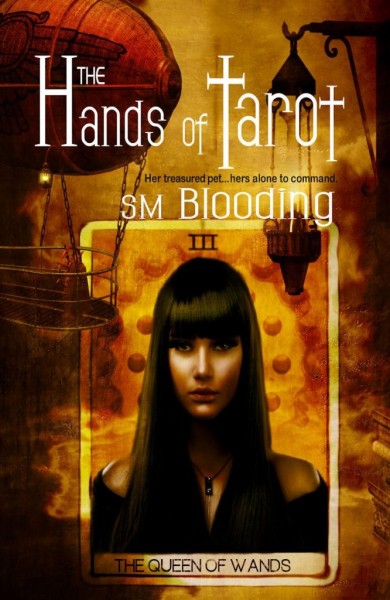 She killed his father.

She imprisoned and beat him.

And now she thinks he’s her trophy.

Synn El’Asim will do almost anything to prove her wrong. But he’s only proving her right.

Queen Nix awakened his Mark of power and inducted him into the House of Wands. She knew what she was doing. The son of the two most powerful Families standing against her is the ultimate prize. What she didn’t take into consideration was that maybe he was too strong for her.

The Families are weakened, and it’ll take a lot more than one young man with a powerful Mark to take on…

The Hands of Tarot.

The Hands of Tarot by S.M. Blooding

Synn El’ Asim is the son of two powerful families. But his parents are somewhat disappointed that his Mark of power hasn’t shown up yet. Finally though, it does…and it comes at a most unfortunate time.

Because Synn is Marked in an unusual way, he immediately draws the attention of the sultry yet evil Queen of Wands. Synn falls under her spell through none of his own doing, and knows he must find a way to get out of her clutches. With the help of some crafty allies, maybe he can do just that…but it will be far from easy.

This book was my first foray in steampunk…and it’s not exactly what I expected! Not in a bad way though. I will say this book was definitely unlike anything else I’ve ever read.

The author was quite skilled at world building. This novel takes place in a fantastical setting, and there are really some unique contraptions within! Synn is a bit of an inventor, so the author had some room for creativity when it comes to steampunk machines. The descriptions for everything were so vivid that I had no trouble imagining what objects would look like.

As for characters–well, there I am a little more judgmental. Synn is a hardworking boy that has already seen so much of the world at a very young age. Did I mention that the novel is told in first person, narrated by Synn? I love a male point of view. Nix, however, is a bit more of a quandary for me. I absolutely love that a woman is so powerful in this fantasy world–but she was positively heinous. Why can’t a book ever have a dominant woman that also has some redeeming qualities?

I had two main problems with this novel. The first is that it kept throwing terms at me without telling me in any way what they meant. I would eventually figure things out for myself, but often it would be a few pages later and I’d find myself flipping back to reread the first instances of the word. Of course new terminology will be introduced in a novel such as this, but I would have appreciated a bit more definition for them. Secondly, the pacing was somewhat uneven. There were times when things happened so fast, I’d swear I missed something–which again, caused me to go back and reread. Then there were parts where conversations or details were kind of unnecessarily long-winded. I’d sometimes skim paragraphs.

All in all, I think Ms. Blooding did a great job bringing this rich fantasy world to life. I enjoyed the novel and her writing style, and I would be excited to read more from her in the future.

SM Blooding lives in Colorado with her pet rock, Rockie, and Ms. Jack, who’s a real bird. She’s still learning to play the piano and guitar, which is going marginally better, and for those of you looking for an Arabic update, she has successfully learned one word, “Yalla,people yalla!”

Her latest book is the YA steampunk, The Hands of Tarot.

Visit SM Blooding on the web at  www.smblooding.com.

SM Blooding is giving away a set of Tarot Dolls and an autographed copy of The Hands of Tarot!