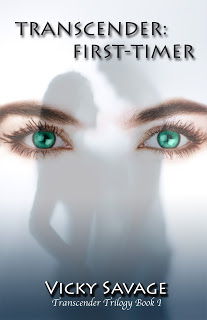 When a freak lightning storm turns terrifying, Jaden Beckett, a typical Connecticut teenager, is suddenly shifted into a parallel existence where she finds herself a member of the ruling family in a counterpart of America on a strange alternate version of earth–one filled with hidden dangers, political intrigue, remarkable creatures, and forbidden romance.
› Visit Amazon’s Vicky Savage Page

Born and raised at the foot of the Wasatch Mountains, in Salt Lake City, Utah, Vicky Savage became irresistibly enchanted by the lure of the ocean when she attended law school in Florida. She practiced law for several years before taking time off to raise her two children. She lives on the water on the west coast of Florida with her husband, son, and two dogs. Ms. Savage recently completed Book 2 of the Transcender Trilogy, Streaming Stars, which will be released in 2012.
Find Vicky Savage
Website | Twitter | Facebook
Find Transcender: First-Timer
Amazon Paperback | Amazon Kindle  | BN | Smashwords
Click the banner at the top to follow the rest of the tour!