If there is one thing eighteen-year-old Aurora Sky wants, it’s to get off the iceberg she calls home. Being kissed before she graduates wouldn’t hurt either.

Then a near-fatal car wreck changes everything. Government agents step in and save Aurora’s life in exchange for her services as a vampire hunter. In Alaska. Basically she’s a glorified chew toy. All thanks to her rare blood type, which sends a vampire into temporary paralysis right before she has to finish the job… by hand.

Now Aurora’s only friends are groupies of the undead and the only boy she can think about may very well be a vampire. And if he’s a vampire, will she be forced to kill him?

Aurora Sky is muddling through her final year of high school, waiting for the day when she can leave Alaska for college. Her dreams are dashed in an instant when she gets into a life-changing car accident. Aurora’s saved from the brink of death, and is now part of a government agency that eradicates vampires.

Suddenly, Aurora’s world isn’t so boring anymore. She’s not entirely sure why, but her entire personality has changed, and her old life gets left behind. But between killing vamps and spending time with the darkly gorgeous Fane, she doesn’t have much time to worry about it. Aurora’s plans have changed, but that doesn’t mean her future will be boring.

This was a really quick read for me, and I quite enjoyed it. I did find some things a bit predictable, but on the other hand there were a couple of things I didn’t see coming at all.

I felt for Aurora, really, in the beginning. She just kind of…exists in her school, and even her so-called best friend doesn’t seem to care about her at all. Even worse, her parents do not agree on anything where Aurora is concerned. Her mom is there for her no matter what, but her dad turns tail and runs when things start going in a direction he doesn’t like.

When Aurora awakens from her accident and goes home with the knowledge that she is now a vampire hunter, her personality does a complete 180. Suddenly, she’s courageous, sassy, confident, and so over the friends she had in the past. But, just like before, she seems to be alone. Until she catches the attention of Fane Donado.

I have to say that the unveiling of Fane came as much more of a surprise to Aurora than it did to me. I mean, simply the way she described him gave it away! And this is a first person narrative, so when she saw all his weird habits, something should have clicked for her way before it did.

I wish that a few more things would have been explained, such as where Aurora’s father went, and what his problem was anyway; why Aurora changed so completely after becoming a hunter; and how the “Agency” knows who to recruit anyway. This is a series, so I’m hoping these questions may be answered at some point in another book.

I really liked the fight scenes, I just didn’t feel there were enough of them. I also thought the way things ended with Renard and Co. was kind of abrupt. But I loved the teasing between Fane and Aurora and I’m excited to see how things will progress between them.

I’m totally on board for more Aurora Sky–I just hope to see her kicking more vampire butt in the next installment! 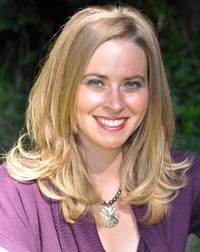 Nikki Jefford is a third generation Alaskan who loves fictional bad boys and heroines who kick butt – especially ones who go by the name of Buffy. She is the author of the YA paranormal romance trilogy SPELLBOUND. Nikki married Sebastien, the love of her life, while working as a teaching assistant in France. They now reside in the not-so-tropical San Juan Islands, 70 miles northeast of Forks, Washington.

Click the banner at the top of the post to enter to win signed copies of the book, as well as other awesome Alaska-themed prizes!