On the first day of September, 16 year-old Meredith Harper rules over the teen it-crowd of Belfast, Northern Ireland. But beneath the surface, Meredith’s complicated web of manipulative lies and self-serving intrigue are slowly beginning to threaten her social position and she finds herself being challenged by handsome Mark Kingston, the only guy in the school who’s always hated her.

In a world where nothing stays secret for very long, Meredith and her friends will need all their skills to guess who’s in, out, coming out, going up, going down, dating, cheating, lying and trying to cope….

What happens when people don’t like your characters?
Gareth Russell

We live in the age of being “nice” and woe betide the author who doesn’t provide young adults with role models and inspirational figures. If a character is mean, then they have to be shown learning a lesson or having a heart secretly buried beneath their ice-cold front. But the problem I have with that is that it’s not only unrealistic, but it also assumes that young adult readers are so young and impressionable that they’ll do whatever a character does in the book. I don’t think that’s the case, clearly. However, there is a fine balance that a writer needs to get right if they’re going to write a book that heavily features characters behaving “badly.”

I have had to deal with that challenge myself. The central character in my book “Popular” and its sequel, “The Immaculate Deception,” is a girl called Meredith Harper, a 16 year-old brunette from Belfast in Northern Ireland with superb self-confidence and a savage wit. Meredith is manipulative, self-assured, self-possessed and incredibly ruthless. One reader told me that she thought Meredith was number 2 on the list of fictional villainesses, right below Dolores Umbridge. However, the overwhelmingly surprising thing about a lot of feedback from “Popular’s” readers was how many of them actually liked Meredith. Not only did they like reading about her, but many of them were actually rooting for her. They want her to win and they’re okay with what she has to do to do it. Furthermore, many readers take a strong dislike to one of the novel’s ‘nicest’ characters, Blake. This is not what people think is supposed to happen in fiction, particularly young adult fiction, where readers are supposed to instinctively cheer for the nice guy and eagerly await the mean girl falling from power. But with “Popular,” that didn’t seem to happen.

Part of the reason why so many readers cheer on Meredith but dislike Blake is because we’re starting to realize that there’s a huge difference between being nice and being good. At one point, Cameron, who’s friends with both Meredith and Blake in the book, defends Meredith to her critics by saying that although she isn’t always good, she is a great friend. Meredith, Imogen and Kerry are loyal, even if they aren’t always nice. In contrast, there are plenty of characters in the book – and in life – who are so determined to be everybody’s friend that they end up being loyal to no one. It’s a difficult balance to strike, yes, but the fact that so many people seemed to side with Meredith maybe shows that people would prefer to have a friend who has their back, rather than someone who wants everyone to like them.

Another part of writing mean, bitchy or forthright characters is that there’s a special kind of joy that comes in being able to give them some of the best lines. Half the fun of reading a book with someone like Meredith, Blair Waldorf or Regina George in it is, I hope, that they say things that you wish you could say in real life. When Meredith shoots down a guy who’s hitting on her at a house party by saying she wishes his mother had been sterilized, I was thinking of a friend of mine who is always getting hit on by guys when she just doesn’t want to be. With everything being so politically correct today and everyone trying to avoid saying anything that could possibly give any kind of offence, it’s refreshing to read or write about characters like Imogen or Meredith who don’t let such things stand in the way of a witty one line.

However, there is a line. At what point does a bitchy character cross over into being downright hateful? The most obvious way, of course, is when they display some truly awful and offensive opinions – sexism, homophobia, racism. Particularly if they’re displayed in a very serious way, rather than a light-hearted way like they are in the characters of Sue Sylvester in “Glee,” Karen in “Will & Grace” or Jane in “The New Normal.” But there can also be a very clear line which I like to think is the difference between bitchiness and bullying. Crossing that line is when a character changes entirely.

Bullying is one of the most loathsome and objectionable things facing young people in our society and with the advent of cyber-bullying and the rise of social networks, it’s getting easier and easier to do it without getting caught. I think the people who do it are vile and I feel very strongly about it, as do thousands of other people. It was therefore so important to me that there should be a clear differentiation in the “Popular” series between those characters who didn’t suffer fools lightly (Meredith and Imogen) and those who were out-and-out bullies (like Harry Irwin in book 2, “The Immaculate Deception.”) Meredith and Imogen are not very nice to people who “get in their way.” They often behave meanly or inappropriately to their in-school rivals, like Coral Andrews, the hipsters’ queen-bee, but they would never start belittling or attacking someone they didn’t know. That’s the difference between them and people like Harry. They are better people.

In the end, you have to trust your gut as a writer and trust that your readers will appreciate a darker sense of humour and what you’re trying to do with your characters and your story. Are the characters in “Popular” perfect? No, absolutely not. No-one is. Sometimes it’s just more fun to sit back and read about a character who’s a little bit larger-than-life and doesn’t care who knows about it. 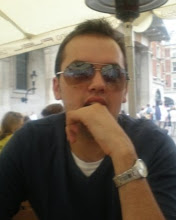 Gareth Russell was a student at Down High Grammar School in Northern Ireland before he went onto to study Modern History at Saint Peter’s College in the University of Oxford.

Gareth is the author of several plays and his first novel, Popular, was originally published in 2011 and has been updated for republication in 2012. Since 2011, Popular has been adapted for the stage on several occasions.

Gareth divides his time between Belfast, London and Connecticut. His accent is therefore best described as polymorphous, shifting with the greatest of ease from Northern Irish to English to American. This pleases him greatly. His first ever word was “shoe” and if he had to have dinner with one person from history, it would be Anne Boleyn.