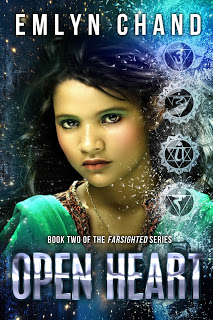 Simmi Shergill’s life is a mess. Her powers of psychic feeling are on the fritz, and Grandon Township’s sudden population boom has brought quite a few unsavory characters to town. She also looks like an over-blown balloon in her size 14 pants, but not even starving herself seems to be helping.

At least she has Alex, the boyfriend who loves her so much he’d do anything for her. Last summer, he even risked his life to protect her from the mysterious boy everyone was convinced wanted to kill her.

Just one problem: she’s not so sure she feels the same way. Is Alex really the man of her dreams? Why can’t she stop fixating on her would-be killer, Dax? Part of her wants to run screaming in the other direction whenever Dax is around, while the other part longs to run into his embrace, no matter whom she’d hurt or what she’d risk.

Simmi’s loyalty is on the line. Whom will she choose—the blind seer who loves her, or the charming telekinetic with “bad idea” written all over him? Emotions run high in the tension-packed book two of the Farsighted series.

See my review of book one, Farsighted.

We exit the school, and Alex startles me by yanking my arm in the opposite direction of the flagpole. He finds an empty patch of grass and scoops me into his arms for a dramatic, old timey kiss.

“What was that for?”

“Because you’re nervous, and I wanted to make you feel better.”

“Hey, I’m the one with clairsentience here.” I titter.

Alex ignores my comment and reaches down to grasp my hands. One of them is holding the lily he gifted me earlier in the day. He plucks the flower from my fingers and tickles my cheek with the petals as he traces tiny circles across my skin. He repositions the flower between his thumb and ring finger and uses his index finger to tuck a stray strand of hair behind my ear, then tucks the stem in, too. The whole time I see my image reflecting back in his glasses. My ghastliness is destroying this tender moment. It’s almost too much to bear.

His lips brush against my cheek, and I use the opportunity to slide his glasses into his soft spiky hair. No longer distracted by the unattractive reflection, I relish the sight of his unshielded eyes, then draw in closer and touch his eyelashes with mine. I outline the square shape of his jaw with my finger, then nuzzle his nose with my nose. Alex allows me to study him without expressing any discomfort. He’s overcoming his insecurities as a way to be closer to me. I wish I could do the same.

I give him another kiss and his face lights up. His skin glows with a subtle orangey-gold hue and his aura vibrates soothingly, as if massaging me. For a moment I allow myself to relax in the security of his strong, steady presence. Then he obliterates the comfort altogether by making another unwanted proclamation. “I love you, Simmi.”

Rather than starting a fight or walking away, I push him back against the brick exterior of the school and press my body into his, ignoring my insecurities. I kiss him the best I can and wrap my arms around the back of his neck. I mimic his aura, producing massage-like vibrations, and I go over the options in my mind.

I can’t tell him mujhe pata hai forever. Eventually, I will either have to tell him I love him, or worse still, tell him I don’t. I almost love him. I’m almost to that place. Maybe I’ll feel it by the end of the week or by the end of the month. It has to be only a matter of time. If I tell him I don’t feel the same way, it will hurt him so badly. Alex is the best guy I know, and he doesn’t deserve that—least of all from me.

Alex turns his head to the side and tries to retreat from our impromptu dance of passion, but I push his face back into mine and kiss him deeper, more fully. Something inside him stirs. The tickling vibration becomes firmer and hotter, and the heat thickens, wrapping us both in a crashing embrace. A tidal wave hits us from all sides and then turns to vapor. I kiss him so hard I forget the reason I initiated this steamy make-out session. I forget we’re in a public place, and I almost forget my insecurities enough to surrender to the lapping waves as they spin around our entwined bodies.

Alex places his hands on my shoulders and pushes me back a couple inches. “Okay, enough. Not that I’m not enjoying this, but I kind of need to breathe, too.” He takes a few exaggerated breaths and shakes his head. “If you’re going to do that every time I tell you I love you, I’m going to say it a lot more often. C’mon, Shapri’s been waiting a while. We can pick this up later. Promise.”

He slides his glasses back onto his nose and grabs my hand. We walk to the flagpole where Shapri is standing. As soon as she spots us, her eyes grow wide as if somebody’s slapped her on the back of the head.

I blush and reach to tuck a stray strand of hair behind my ear. Only then do I notice the lily is gone. The flower signifying my dreams, my reminder to always reach for the stars, has been trampled beneath our passion. 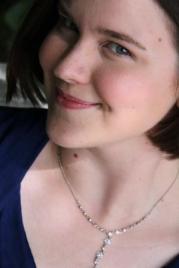 Emlyn Chand emerged from the womb with a fountain pen clutched in her left hand (true story). When she’s not writing, she runs a large book club in Ann Arbor and is the president of author PR firm Novel Publicity. Best known for her Young Adult novels, she is also developing a small, but devoted, following to her children’s book series and is beginning to dabble in other genres as well. Emlyn enjoys connecting with readers and is available via almost every social media site in existence. Visit www.emlynchand.com for more info. Don’t forget to say “hi” to her sun conure Ducky!

Kindle or Nook (Winner’s choice) US ONLY, If international $100 dollar Gift Card to a bookstore.