In the Arena, you’re either a killer or a victim.

If survival meant murdering an innocent person in cold blood every week, could you do it? Are you able to stick the knife into your opponent’s heart while they look at you with fear in their eyes? Life in the Arena turns everyone into sinners.

A homeless boy is kidnapped from the streets and finds himself imprisoned in a far more horrifying place: The Arena, a place where teenage boys fight to the death for the pleasure of various lowlifes.

The Arena is the brainchild of Ryker, an ex-convict addicted to alcohol, gladiatorial-esque combats, and money. When not devising new ways for boys to kill each other, he’s ruling his small empire with a ruthless fist, rewarding his guards with sex slaves and punishing those who oppose him with barbaric executions.

Renamed Dog, the boy from the street proves to be an excellent fighter and finds himself surviving week after week, but as he leaves a trail of bodies in his wake, the ghosts of slain boys haunt him and the violence threatens to wake a beast inside him.

Allegra, a slave girl in the Arena and a victim of Ryker’s constant abuse, is his only key to salvation. She has lost everything already — her family, her innocence, and her dignity — while her will to live hangs on by a thin thread. Can she save Dog’s humanity before she too succumbs to the horrors of the Arena?

Seeking to defy Ryker as Dog rises to power as his champion, the stage is set for something to give in this murderous world of young combatants.

A tale about survival, tragedy, and human perseverance, the Complete SHADOW OF WRATH is the first book in the Sins of the 7 series.

Shadow of Wrath by L.W. Patricks

I think this is one of, if not the, most violent books I have ever read. But that’s OK–the synopsis prepared me for that and I am made of strong stuff. However, picturing the violence that was in the book being brought upon children is what made Shadow of Wrath so disturbing. And I don’t know why–I’m a big Hunger Games fan, and of course that is filled with child on child violence. Maybe the actual killing acts weren’t described as vividly as they are in Shadow of Wrath?

In any event, the story revolves around a young boy with no name (who is to become known as Dog) who is kidnapped and brought to an underground arena where children fight to the death under the tyranny of the sick Ryker. Ryker has engineered it so his empire of blood is remote and undetectable, and his slaves and gladiators have no hope of escape. That is until Dog becomes the greatest champion the arena has ever seen.

Shadow of Wrath was filled with horrifying fights and other depraved acts, but it was about more than that. Every character in this book felt so defeated and lost. The lone female character, Allegra, was the only one who held onto some faith throughout an unimaginable ordeal. The story does have its’ bit of romance between Dog and Allegra, but it is the tiniest bit.

I really liked all the fight scenes, and I even appreciated the way that the author managed to make the antagonist absolutely one of the most vile and depraved characters I have ever come across. With every thing Ryker did, I never thought he could get any worse, but then he always did. Characterization was not much, but I still managed to get to like Dog, and to some extent, Allegra.

This book was definitely a page turner and I read it late into the night…I’m actually shocked it didn’t give me nightmares. Though I wasn’t thrilled with the way things ended, I encourage others to read this book, because it will undoubtedly affect you in some way. 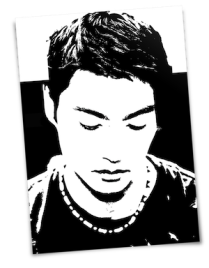 L.W. Patricks is the author of SHADOW OF WRATH and the literary architect behind the upcoming Sins of the 7 series with his second book: AWAKE THE GHOSTS to be published late 2013.

His short fiction works has been published by Crow Toes Quarterly Magazine, Fiction and Verse literary magazine, and upcoming Denizens of the Dark. He enjoys writing contemporary fantasy with an emphasis on creating urban mythology for his stories.

Though he calls Toronto his home, L.W. Patricks has a passion for exploration and has travelled all over the world including Germany, Netherlands, Italy, France, Spain, Czech Republic, Austria, United Kingdom, Thailand, Hong Kong, Cambodia just to name a few. His diverse experience amongst other cultures provides inspiration for his stories.

He currently lives in Toronto with his wife where he enjoys the scorching summer days and the icy winter nights while masquerading as a Word Samurai. He claims to be the offspring of a typewriting chimp and a literary ninja.

You can visit him at his website at www.lwpatricks.com

The author is offering a tourwide giveaway with a grand prize of an Amazon gift card.