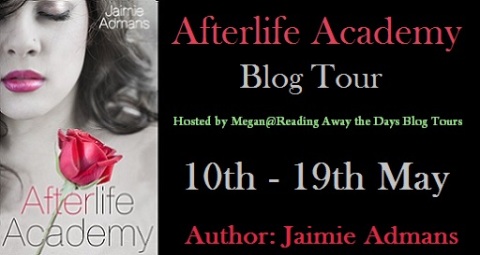 Even being dead isn’t enough to get you out of maths class.

Dying wasn’t on sixteen-year-old Riley Richardson’s to-do list. And now, not only is she dead, but she’s stuck in a perpetual high school nightmare. Worse still, she’s stuck there with the geekiest, most annoying boy in the history of the world, ever.

In a school where the geeks are popular and just about everything is wrong, Riley has become an outcast. She begins a desperate quest to get back home, but her once-perfect life starts to unravel into something not nearly as great as she thought it was. And maybe death isn’t really that bad after all…

Welcome to Afterlife Academy, where horns are the norm, the microwave is more intelligent than the teachers, and the pumpkins have a taste for blood.

Riley Richardson thinks her life has been going pretty great up to this point…until she suddenly loses it when her slightly unbalanced boyfriend kills both Riley and the school geek, Anthony, in a car accident. Riley and Anthony are transported to the mystical Afterlife Academy, where they will learn how to deal with the fact that they are now dead.

Anthony seems to fit in right away, however, Riley makes it known that she doesn’t think she’s supposed to be there. Can Riley come to terms with the fact that she’s left her life behind for all eternity?

First of all let me say, I love love LOVE the cover! The grey juxtaposed with the stunning pinks and reds is not only beautiful, but has actual meaning within the story. The girl on the cover is also sadly beautiful, and this easily could have been how Riley looked while laying in her coffin.

Yes, the subject matter is a bit macabre, but once you get over that, Afterlife Academy is a cool, original YA tale. Riley was not the best person during her teenage years, even though she liked to think differently. She was a member of the popular crowd with a big shot boyfriend, and as such made it her mission to torment those she saw as lesser than her. Her favorite target was Anthony, a boy who lost his parents and takes pride in his geek status. It’s a matter of karma that the two die simultaneously, and have to enter into Afterlife Academy together.

Afterlife Academy itself is drab, but filled with such things as pet vampire pumpkins, and Narcissa, the demonic lunch lady with a soft side. Riley immediately hates the school, and goes about trying to find a way out.

Riley was pretty annoying for the first third of the book, but she quickly grew into a character who learned a lot about herself. Anthony was so cool, and even though Riley made his life miserable before, he never hesitated to be there for her after death. I enjoyed watching their friendship develop.

The end came on a little quickly, I thought, but it was just perfect. It’s so refreshing not to have to wait and wait for another book to come out to get closure on someone’s story. I’d love to read more from this author anytime!

Jaimie is a 27-year-old English-sounding Welsh girl with an awkward-to-spell name. She lives in South Wales and enjoys writing, gardening, drinking tea and watching horror movies. She hates spiders and cheese & onion crisps.

She has been writing for years, but has never before plucked up the courage to tell people. She writes mostly chick-lit and young adult. Afterlife Academy is her third novel and she hopes you enjoy it!