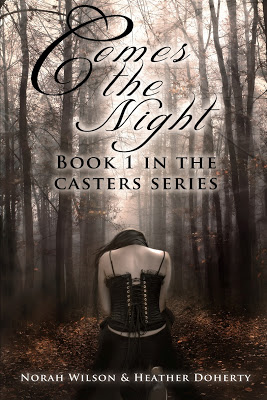 How far would you go to escape your own personal teenage hell? Would you run away, break away from everything you know—even your own body?

Alex Robbins, Brooke Saunders and Maryanne Hemlock could not be more different, yet they all have something in common—deep and soul-searing pain. They are also all students at Streep Academy, a boarding school just one step away from juvie, where they’ve come to complete high school. The three have been relegated to Harvell House, the residence reserved for the hardest cases, the so-called Rejects from Reject Row.

In the forbidden attic of the old Victorian house-turned-residence, the girls discover the diary of Connie Harvell, a young woman who was confined and abused there some 50 years ago. In the end, Connie’s attic prison couldn’t hold her—not completely. She found a way out. At least a dark part of her did. And after reading her diary, the girls discover they can escape at will too. A terrifying, thrilling flight from their bodies and their troubles.

But God help them, their pain isn’t all they leave behind when they join with the night.

And God help anyone who’s wronged them…

Comes the Night by Norah Wilson

Alex returns for another year at Streep Academy, where she will be joined by roommates Maryanne and Brooke in the sinister Harvell House. But before the school year officially starts, Alex wakes up in the attic of the house after being attacked but remembering nothing. She also finds an old diary that belonged to a girl their age who used to live in the house. Alex shares the secrets of the diary and the attic with her roommates, and they all learn of an exhilarating way to escape their troubles.

But before long they are abusing their new power, and must remind each other to withhold themselves before things get way out of hand. While they’re enjoying what they’ve found in themselves, there’s also the matter of what happened to the girl in the diary. The three girls’ school year is going to be beyond interesting, that’s for sure.

It did take me several chapters to really get interested in this book, but once I did I couldn’t stop reading. Alex and her roommates and all so different, each with their own internal pain they need to deal with. But the way they come together through something so unique was nice to watch.

The main thing I had trouble with was the language and diction, not only in the way the characters speak, but in the writing itself. I’m not sure the ages of the authors, but I found it very hard to believe that three 17 year old girls would speak in the way they do in this book. The writing style was just hard for me to get into, and some of it was very repetitive.

The story is told in alternating perspectives from all three of the girls, but is told in third person point of view. It takes a long while to get completely into the backstory of each girl, but once you do, it’s clear to see why each one is so hurt. Alex is the tough girl with a secret she wants no one to ever learn, because she doesn’t want their pity. Maryanne is the quiet one who may not have told the entire truth when it comes to the recent death of her baby brother. Brooke is the sassy city girl who may put up an attitude, but secretly harbors insecurities she can’t get over. Although the three girls start the school year barely talking to each other, they can all sense each other hiding something and it brings them closer together.

I really liked the unique supernatural themes of this book, and although it had many layers and different plot threads to follow, the complexity was not bothersome at all. The ending was fitting and sad, and although this is a series, I felt this book could have been left just as it is and be a complete story. I’m not sure what else the girls may have to get into, but I’ll definitely love to read more of their adventures together.

HEATHER DOHERTY fell in love with writing while taking creative writing courses with Athabasca University. Motivated by her university success, and a life-long dream of becoming a novelist, she later enrolled in the Humber School for Writers under the mentorship of David Adams Richards. Her first literary novel was published in 2006. While still writing dark literary (as well as not-so-dark children’s lit), she is beyond thrilled to be writing paranormal/horror with Norah. Heather lives in Fredericton, New Brunswick with her family. (No pets, but I swear Norah’s dog, Chloe, calls me Aunt Heather).