Charlotte and Nicole were once the best of friends, spending summers together in the Maine island house owned by Nicole’s family, but they have since grown apart. A successful travel writer, Charlotte lives on the road, while Nicole, a food blogger, lives in Philadelphia with her surgeon-husband, Julian.

When Nicole returns to the island house to write a book about island food, she invites her old friend Charlotte for both sentimental and practical reasons. Outgoing and passionate, Charlotte has a gift for talking to people and making friends, and Nicole would like her help interviewing locals for her book. Missing genuine connections in her life, Charlotte agrees.

Reuniting that June on Quinnipeague, they feel the same excitement they always did.  But ten years have changed them.  There are secrets, born of betrayal and fear, that could destroy their friendship for good.  And they aren’t alone on the island.  There are locals wary of betraying confidences, ill-timed visits from Nicole’s mother and step-daughter, and more food than any woman who loves island food could ever ask for.  Through it all, Nicole struggles to save her marriage, while Charlotte is drawn, night after night, to the far end of the island, where the herbs for which island food is renowned scent the ocean air.  Equal parts gourmet, homeopathic, and mystical, these herbs, so crucial to Nicole’s cookbook, are being safeguarded by a dangerous man and his dog.

As the days pass and secrets fall, the two women survive test after test.  But with the last one, a health crisis for Nicole’s husband, Charlotte has to decide whether to reveal a final secret that could either save his life – or destroy him.

QUINNIPEAGUE LAY ELEVEN MILES FROM the mainland. With a year-round population of nearly three hundred, it was serviced by a daily mail boat that carried groceries and a handful of passengers, but no cars. Since Charlotte had one of those for the first time in her life, she proudly booked the ferry, boarding in Rockland on a Tuesday, which was one of only three days each week when its captain cruised past Vinalhaven to islands like Quinnipeague. Nicole had offered airfare to speed up the trip, but Charlotte flew everywhere else in life. This summer was to be different.
The car was an old Jeep Wrangler, bought from a friend of a friend for a fraction of its original cost. Giddy with excitement, she stashed the soft top in back, and, as the warm June air flowed freely through windows and roof, drove up from New York herself. She welcomed the time it would take. After a frantic two months of work to free herself up, she wanted to slow down, decompress, and maybe, just maybe figure out why she had agreed to a last summer on Quinnipeague. She had sworn she wouldn’t return, had sworn off painful memories. But there were good memories as well, all of which had flooded back as she read Nicole’s e-mail in Ireland that day. She replied instantly, promising to phone as soon as she returned to New York. And she had. Literally. Right there in baggage claim while waiting for her duffel to come through.
Of course, she would come, she had told Nicole, only afterward doing the reasoning. For starters, there was Bob. She hadn’t gone to his funeral because she hadn’t had the courage to face even a dead Bob after letting him down—letting them all down—so badly. So she owed Nicole for the funeral, and owed her for the betrayal. 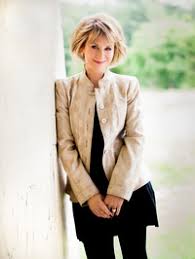 BARBARA DELINSKY has been published in twenty-eight languages worldwide. A lifelong New Englander, Delinsky earned a B.A. in psychology at Tufts University and an M.A. in sociology at Boston College. Delinsky enjoys knitting, photography, and cats. She lives in Needham, Massachusetts.

Posted on June 30, 2013, in books, promo, reading. Bookmark the permalink. Leave a comment.