BOOK TOUR REVIEW & GIVEAWAY: Out from Under You by Sophie Swift 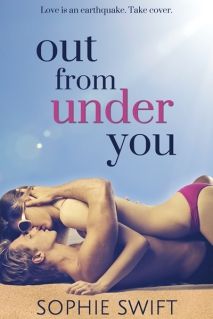 “Love is an earthquake.  It comes when you least expect it. It rips the ground clear away. Right out from under you.”

The day Lia Smart met Grayson Walker, eight years ago, was the day she fell helplessly in love with him. Coincidentally, it was the same day Grayson fell in love with someone else: Lia’s smarter, sexier, superior-in-every-way older sister, Alex.

Now, nearly a decade later, Alex and Grayson are long over and twenty-two-year-old Lia has finally managed to forget all those lonely nights she spent pining after her sister’s boyfriend. But when Grayson unexpectedly arrives back in town with Alex for Labor Day weekend and the two announce that they’re not only back together but engaged, all the feelings that Lia buried suddenly come bubbling back to the surface.

But Lia is no longer the awkward, gangly tomboy she was at fourteen. Far from it. And Grayson is conflicted by the lustful thoughts he’s now having for her. He knows he could never act on those thoughts, however. Grayson has always prided himself on being one of the “good guys.” But as the weekend wears on, he’s finding this new grown-up version of Lia more and more impossible to resist…

Heartbreaking and sexy with a dash of humor, Sophie Swift crafts a passionate, unforgettable tale about desire, growing up, and the kind of love that shakes us to the core.

Out from Under You by Sophie Swift

I love a sexy, clandestine romance as much as anyone, but the idea of a girl stealing her sister’s fiancee bothered me quite a bit. Maybe it’s because I have 2 sisters and I would never dream of doing that to them, no matter what feelings I may harbor towards their significant others.

Once I (sorta) got past that, I thought the story was pretty hot. I liked how there were flashbacks of how Grayson and Lia, and subsequently Alex, met. There’s quite a big age difference between Grayson and Lia, so their relationship grew from a crush/infatuation to sort of an ache in the back of Lia’s mind.

I liked Lia, and I respected how she tried to keep her mother’s restaurant alive, even though she couldn’t get it quite right. Though her mother hurt the family immensely, Lia is trying to keep things as normal as possible for her father. Alex wasn’t really bad in and of herself, but I thought the book would have turned out way more interesting if the author hadn’t tried to villainize Alex towards the end. In real life, the hurt party in a failed relationship is not always evil.

What I didn’t like was the way Grayson was portrayed as such a gentleman, because it didn’t seem that he was a gentleman at all when he was sleeping with his still-fiancee’s sister. I just thought it was very shady of him. If he wanted Lia, he should have had the courtesy to break things off with Alex first. He was even saying to himself how mush he loved Alex. The things he did just didn’t sit well with me.

Even though it bothered me that they were cheating, the sex scenes between Lia and Grayson were VERY VERY HOT. I really believed their passion, and the scenes were a turn on without being too raunchy.

I think I will continue this series, though I thought this book wrapped up the story nicely.

Sophie Swift is an east coast girl who recently transplanted to Southern California. She writes about sexy boys by day, and dates them by night. Her sizzling, new adult romance, OUT FROM UNDER YOU, the first in a new contemporary series, will be released in August of 2013. She loves books that quicken her pace, music sung by adolescent boys, and cupcakes with too much frosting.