Valentina and the Haunted Mansion 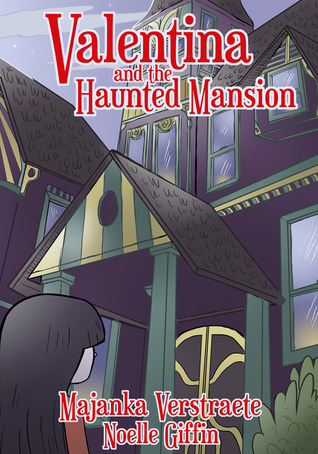 Valentina isn’t thrilled with her parents’ decision to move into an ancient, gigantic mansion in the middle of nowhere—filled with dark, unsettling rooms, and far away from civilization, where they don’t have to worry about hiding who they are. Sure, it may be perfect for a vampire family like hers, but moving here meant leaving her best friends behind.

The new house has some perks, though. Valentina gets to choose her own room, and when she explores the mansion on her own, she discovers a trophy room, a museum room, a music room, and much more.

From the moment Valentina started exploring, however, she’s felt someone watching her. Strange things start to happen all around her: footprints appear in the dust, a disembodied voice sneezes….

…and just because Valentina is a vampire, doesn’t mean she doesn’t get scared like any other little girl.

Valentina and the Haunted Mansion by Majanka Verstraete

Pretty cute children’s book for more advanced readers…I’d say around second grade. It was new to get some perspective from a vampire kid, and the thought of a vampire that is afraid of other monsters is pretty funny! I thought the illustrations went very well with the story, too.

The message, which teaches children they can find friends in the most unexpected places, is a nice one. I just though the ending was a little too abrupt. I would have liked to see what Valentina’s parents thought of her new friend!

Though the book has a slightly scary feel, I think it could be enjoyed by young readers year round, not just in the Halloween season.

Majanka Verstraete writes speculative fiction for children and young adults. She’s studying for her Masters at Law degree, and spends all her spare time writing and reading. She lives in Belgium. Her debut picture book, Valentina and the Haunted Mansion, was released by Evolved Publishing on May 20th, 2013. Her upcoming picture book, Valentina and the Whackadoodle Witch, will release in September 2013. Her debut chapter book, The Doll Maker, and her debut young adult novel, Fractured, will both release in September 2013 as well.