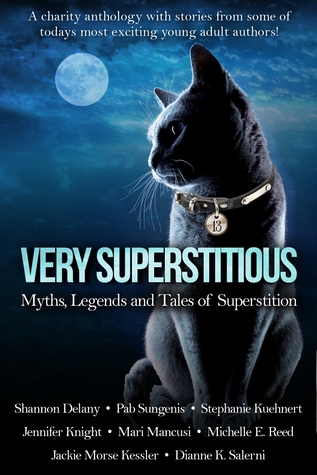 Very Superstitious: Myths, Legends and Tales of Superstition by Georgia McBride
This is a collection of short stories that some well known indie authors got together and published fr charity (the SPCA). Authors include Mari Mancusi, Jackie Morse Kessler, and Shannon Delany, among others.

There are eight stories included: “The Rescue”, “Thirst”, “Chupacabra”, “The Road Home”, “Gift of the Were-Magi”, “Midhalla”, “Bloody Mary”, and “The Silverfoot Heretic.” The stories widely varied in main theme, but all had a supernatural element.

My favorite tale of the collection is “Bloody Mary” by Dianne K. Salemi. I am assumin it takes place is the late 19th century, but no date was explicitly given. In this story, a girl named Mary Louise entertains her 2 friends and her cousin newly arrived from Jamaica, by playing a game of Bloody Mary. Mary Louise’s cousin sees something most unexpected in the mirror, and the consequences will be dire and lead to a curse for one of the girls. This story stayed with me even after I read it.

I also enjoyed “Chupacabra” by Jennifer Knight. It is a supernatural story told from two points of view–the creature, who uncontrollably murders people, and the girl who’s hunting him. This does turn into a bit of a romance, but it wasn’t cliched. I wondered what’s going to happen to the couple next, as the ending was kind of a cliffhanger.

There are other stories her, about wandering ghosts, vengeful gods, and more. But these are the two that caught my attention most. I thought this was a great anthology to get me into the Halloween mood, and I love that it’s for charity!

Make sure to enter the tour wide giveaway!