The Apocalypse Chronicles, Book One 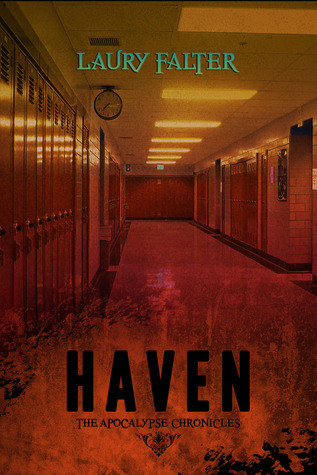 On an ordinary day in early September, Kennedy Shaw leaves for school unaware that within a few minutes the world she knows will be gone – succumbed to an outbreak of epidemic proportions. After finding a safe haven inside the security of her enclosed high school, she learns that four others have survived, one being a bold, mysterious transfer student from Texas whose unruffled demeanor harbors more than a cool interest in her. As they struggle to survive the dead fighting their way inside, will Kennedy discover there is more to life than survival? And will she and the others find a way to live in this terrifying new world?

I have to say, I’ve never read a book with a heroine like Kennedy before–and that is an awesome thing! A teenage girl, given elite military training by her Navy SEAL father, Kennedy uses throwing stars and can handle an assault rifle like a pro. Unfortunately, since the death of her father just a year ago, these characteristics haven’t helped her stay the the top of the popular list at school. Good thing she’s a senior and about to get out of there…that is until the world ends one morning, and her schoolmates and teachers turn into flesh eating monsters.

Only 5 people survive and find themselves barricaded inside the school together. Luckily for Kennedy, one of her fellow survivors is the guy she’s been crushing on from afar for over a year, Harrison. She will soon learn that he has his secrets, just like she does. And his may put them all in danger, or be their salvation.

The idea of apocalypse survivors being locked in one place together is not new, but the author made this story her own. Each of the high schoolers is unique and come to find their place in the aftermath of the zombie attacks. Kennedy becomes sort of their leader, which is fine with her because the only person she really trusts is herself.

You could almost say the book is kind of broken into two parts. The beginning of the apocalypse and its’ immediate effects take up the first part, and then several weeks pass before any action happens again. It’s not really implied what happens between the characters themselves in the time that passes, just that everyone becomes used to the new, strange routine of living in a school. I would have liked to see what passes between Kennedy and Harrison in this interim, because without knowing this, it seemed to me like their romance moved very quickly.

The relationship between Kennedy and Harrison was interesting, but it had touches of things I’ve seen before in other stories. He gives her the whole spiel of “I like you but stay away from me for your own good” and of course she does not listen to him. In the second part of the book, it felt like their romance went from 0-60 in no time at all. Maybe this can be attributed to the stressful and unique situation they are in together, I don’t know. I just didn’t feel like there was enough development in my opinion.

I liked the end of the story and how the book actually explained where the zombie virus came from–a lot of books and movies don’t bother to do that. This is the first book in a series and definitely leaves the reader with a cliffhanger. I’ll be more than ready to read the next one in the series!

Laury Falter is a bestselling author of young adult romantic suspense and urban fantasy. She has three series out: the Guardian Trilogy, the Residue Series, and the Apocalypse Chronicles.

One commenter will win an ebook copy of Haven!  Let me know which celebrity you’d like to have as your partner if the zombie apocalypse ever happens 🙂