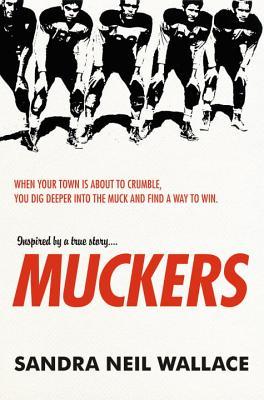 Red O’Sullivan’s world is crumbling around him: the mine that employs most of town is on the brink of closing, threatening to shutter the entire town. Red will be part of the final graduating class of Hatley High School, but he’s got his own burdens to bear: his older brother, Bobby, died in the war, and he’s been struggling to follow in his footsteps ever since. That means assuming Bobby’s old position as quarterback, and leading the last-ever Muckers team to the championship. Maybe then his angry, broken-hearted father will acknowledge him, and they’ll be able to put Bobby’s death behind them.

While the Muckers are racially-united, their town is divided. Anglos live near the top of the mountain and Mexican Americans down below—where Red’s best friend Cruz lives, and Angie, who Red longs to be with. When the Communist scare threatens to tear the team apart, Red and the hardscrabble Muckers must find a way to go undefeated and win the state title.

I went into this book thinking it was going to be mostly about football, but in reality the football is only a vehicle for the other stories the author wants to tell.

The main character of this story is Red O’Sullivan, who is having a hard time in life. Between a father who barely cares if he’s there or not, a mother who’s gone crazy, and trying to live up to the reputation of his dead older brother, it’s a wonder Red is keeping himself together at all. But with the support of his best friend, Cruz, Red proves himself on the football field, and brings the mining town together in a tumultuous time.

The author has a knack for making you feel the desperation in the characters, and in the town itself. For generations, the mine has been Hatley’s main source of income. But over time, the mountain has pretty much given all it’s got to give. Jobs are getting scarce, and the town, which was already on a fine line, is getting ready to collapse. Races are sharply divided, but the one thing everyone can agree on is cheering for the high school football team, aptly and sadly named the Muckers. Their practice field is full of rocks, and they have to practice tackles with a school bus. No one expects Red to do much, but to everyone’s surprise, and his own, he does.

I did enjoy the book, but there were so many parts of it I thought were very slow and found myself skimming. For the first few games, the football was hardly described at all. But I did feel for Red and everyone else in the town, who had all suffered in some way or another.

While the story touches the reader’s heart, it’s even more emotional when you think that this book was actually based on a true story. I am very glad I’m living in the generation I am a part of now.

If you like your sports stories with plenty of background and heart, give Muckers a read.

For fifteen years, Sandra Neil Wallace was a news anchor and ESPN sportscaster before writing novels. After the publication of her first book Little Joe, she was named an outstanding newcomer to the children’s literature scene by the Horn Book. She lives in New Hampshire with her husband, author Rich Wallace. Visit Sandra at www.sandraneilwallace.com  and on Facebook and Twitter.

One commenter will win a copy of the book.  US ONLY PLEASE.