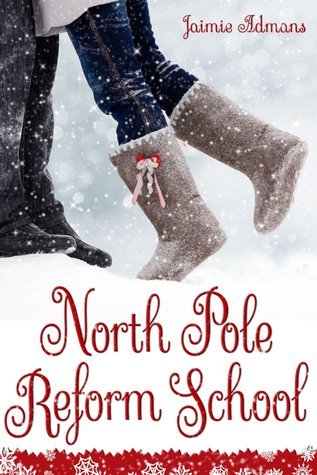 Mistletoe Bell hates Christmas. So would you if you had a name like hers. Her Christmas-mad parents make the festive season last all year, and with another Christmas looming, Mis doesn’t think she can take any more. After her carelessness causes an accident at school, it seems like things can’t get any worse.
Then she wakes up to find The Ghost of Christmases Ruined in her bedroom.
She is taken to the North Pole, to a reform school run by elves determined to make her love Christmas. Stuck in a misfit group of fellow Christmas-haters with a motley crew of the weird and even weirder, watched over by elves day and night, she doesn’t expect to meet cute and funny Luke, who is hiding a vulnerable side beneath his sarcastic exterior. She doesn’t expect to fall in love with him.
But all is not as it should be at the North Pole. A certain Mr Claus is making the elves’ lives a misery, and pretty soon Mistletoe and Luke are doing more than just learning to like Christmas.
A YA romantic comedy in which Santa is the bad guy, teaching reindeer to fly is on the curriculum, and zombies have a fondness for Christmas music.
Suitable for older teens and upwards due to bad language.

This was a short, but really sweet (maybe sometimes too much) story. I like to read Christmas stories around the holidays to keep myself in the spirit. Jaimie Admans never disappoints, so I was happy to see her doing a book like this one.

The main character, Mistletoe Bell, in spite of her name, actually cannot stand Christmas. She is shocked to find herself whisked away to the North Pole along with 4 other holiday-haters to the North Pole Reform School to see if their hearts and minds can be changed.

As one would expect, this story had more than its’ fair share of romantic and borderline corny moments, but I like that about my Christmas tales. It also had humor, and zombies…so that makes up for all the toothache-inducing sweetness.

Mistletoe ends up becoming close to Luke, who is also there to be reformed. Their romance moves very swiftly and the development is kind of not there for me, leading to the reason for my rating. I know this is a less than 200 page novella, but I’ve seen them with much more romantic buildup.

I thought the end would be predictable, but I have to say I didn’t exactly see it coming, and I loved that. I would recommend this novel to anyone who loves the holidays, or even those who don’t…maybe their minds will be changed like the characters!

Jaimie is a 28-year-old English-sounding Welsh girl with an awkward-to-spell name. She lives in South Wales and enjoys writing, gardening, drinking tea and watching horror movies. She hates spiders and cheese & onion crisps. She has been writing for years but has never before plucked up the courage to tell people. Afterlife Academy is her third novel and she hopes you enjoy it. There are plenty more on the way!
Website
Twitter
Facebook
Newsletter
Purchase link:
Amazon

Enter the tour wide giveaway to win a  $25 Amazon GC!