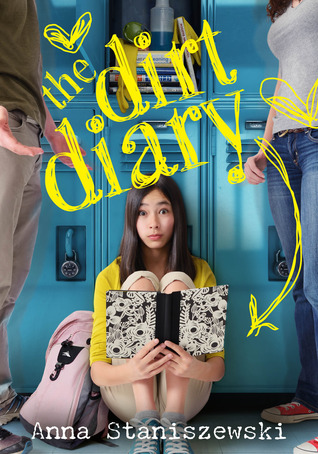 Rachel Lee didn’t think anything could be worse than her parents splitting up. She was wrong. Working for her mom’s new house-cleaning business puts Rachel in the dirty bathrooms of the most popular kids in the eighth grade. Which does not help her already loser-ish reputation. But her new job has surprising perks: enough dirt on the in-crowd to fill up her (until recently) boring diary. She never intended to reveal her secrets, but when the hottest guy in school pays her to spy on his girlfriend Rachel decides to get her hands dirty.

MY THOUGHTS: 3 out of 5 FLEURS DE LIS

The Dirt Diary by Anna Staniszewski

A quick, cute middle grade read. Rachel Lee is in the 8th grade, but she’s got a lot on her mind before even thinking about making the jump to high school. Rachel’s parents have split up, and her dad moved down to Florida. So she *may* have borrowed $300 from her college fund to fly down to see her dad. It’s no problem as long as she replaces the money before her mom notices…right? The annual school bake sale is coming up, and she cannot lose to that snooty Allison again. And to top it all off, she is now the assistant in her mom’s new cleaning business–which includes the houses of the two most popular girls in school. So Rachel begins a “dirt diary” to try to help her keep track of everything that’s going on in her mind.

Though the title of the book is “The Dirt Diary”, I didn’t think the diary itself had that much importance to the story. Rachel used it as a place to list all the secrets she was keeping, and to divulge the weird things she found out about people through cleaning their houses. The diary is really only mentioned a few times, but what I thought would happen with it did not–and that’s a good thing, because it made the book less predictable.

Rachel is 13 years old (I guess…I don’t think her age was ever explicitly mentioned), but she seems a little naive for her age. And she is awkward, painfully so. I actually cringed at a couple of her scenes when she tried to talk to guys. But, she is fiercely independent, and I definitely admired that about her.

I read through the entire book in almost one sitting and I found it just wrapped up a little too quickly for my tastes. It was as if the entire novel was spent building up to these important moments, and then they are over within half a page. I know I am an older reader, but I would have liked a bit more development in certain parts of the ending.

There were funny parts in the book, as well as sweet ones, and more emotional ones. I think this is a great book for middle grade girls to read, if only to let them know they are not the only awkward ones out there!

Born in Poland and raised in the United States, Anna Staniszewski grew up loving stories in both Polish and English. She was named the 2006-2007 Writer-in-Residence at the Boston Public Library and a winner of the 2009 PEN New England Susan P. Bloom Discovery Award. Currently, Anna lives outside of Boston with her husband and their adopted black Labrador, Emma. She teaches courses on writing and children’s literature at Simmons College.

When she’s not writing, Anna spends her time reading, daydreaming, and challenging unicorns to games of hopscotch. She is the author of My Very UnFairy Tale Life and its sequels, My Epic Fairy Tale Fail and My Sort Of Fairy Tale Ending, all published by Sourcebooks Jabberwocky. Look for the first book in Anna’s next tween series, The Dirt Diary, in January 2014, and stay tuned for her picture books,Power Down, Little Robot and Dogosaurus Rex, both forthcoming from Henry Holt.