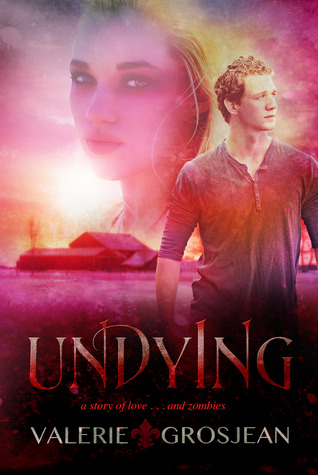 When eighteen-year-old college freshman Christian discovers his dormitory is crawling with the living dead, he knows he has a problem. But once he learns the whole country is overrun by the flesh-eating horde, he must race to protect what matters to him most.

Sixteen-year-old Iris, the girl he loves, is stranded eighty miles away, alone and completely unaware of the gruesome threat surrounding her.

Christian’s plan is to evade the zombies, drive the distance to rescue Iris, and get them both to his family farm—where there are guns, fuel, and everything else they’ll need to survive. His mission seems simple: Get the girl, get to the farm, and stay alive.

Things get complicated when Christian is forced to make an unthinkable choice between Iris and his family. Someone he loves must die, and he must decide.

I love zombie books..I mean, I REALLY love them. A good romance can sometimes draw me in as well, so the prospect of both in one book definitely had me excited to read Undying. While the novel awesomely delivered on the zombie front, the romance was severely lacking.

Christian Winter is a college freshman who is in thus far unrequited love with a high school junior. First off, I have to say this age difference bothered me a good deal. I know it seems like 2 years is not a big deal, but there’s such a maturity gap between a high schooler and someone in college that it’s not even funny. This is why so many relationships fail when one party goes to college.

Anyway, Christian has it bad for Iris. He is an English major and even writes poems about her. As I said, I love a GOOD romance. But this one was so very sappy. Christian fawns over this girl in a very girly manner. Some lines he has, I had to roll my eyes at. What makes things even worse is that Iris doesn’t even seem to really like him even though he feels so strongly for her. She’s actually kinda mean.

Christian is getting ready to go home one December weekend when all zombie hell breaks loose on his campus. After checking his voicemail and discovering that Iris is alive but stranded, he decides to go save her. This off the bat did not make sense. Do you think she was gonna survive for over an hour at a gas station in the middle of the zombie apocalypse?

I know it seems like at this point my rating shouldn’t even be three stars. But let me tell you, when it comes to zombie violence, this book was awesome. And I don’t mean that Christian is going around killing them either–as a matter of fact, he’s kind of a puss and doesn’t even THINK about securing a weapon until about 75% into the story. But the author paints a vivid picture of a town overrun with zombies, and leaves nothing to the imagination when describing how the zombies attack and the carnage they leave behind. It’s disgustingly amazing.

All in all, I am glad I read this book if only for the zombie part of it. To me, Christian is a wimp and kind of needs a punch in the head. I don’t actually like him and Iris together, and that’s not good when you don’t want a main character to get together with his love interest. I also lost any respect I had for him when he decided to have a moment of weakness and put Iris above his family.

I will definitely consider reading the next book in this series, and I truly hope the zombies don’t stop coming.

Valerie Grosjean is the author of the young adult novel UNDYING. She grew up on a Nebraska farm. After college, she married and moved to Northern California, where she lives with her husband and their two young children. Her obsession with zombie movies inspired UNDYING, her first novel and the beginning of the Undying series.
Author Links:
Goodreads: https://www.goodreads.com/author/show/7306455.Valerie_Grosjean
Facebook: http://valeriegrosjeanbooks.com/
Website: http://valeriegrosjeanbooks.com/
PURCHASE:
Amazon | Chapters | Barnes & Noble

Prizes – open to US and Canada: