Jack has been getting on his parents’ nerves for some time. Bad enough he’s a rock musician, has crappy grades and hangs out with his “loser” friends. But Jack’s ability to predict the future — well, that just annoys the hell out of them.

Jack’s classmate, Lauren, is said to have unique abilities too. The town still talks about when she kept badgering her mother about the money in their wall. For the longest time, Lauren’s mother didn’t listen. Finally, she did and she hasn’t had to work since.

Jack would really like to connect with Lauren but can’t figure out how. She’s never looked at him twice. But when he experiences a mystifying event involving visions, voices and spectral visits, Jack figures there’s only one person to help him understand who’s calling out to him and why. Before long, Jack and Lauren are off on a road trip of discovery that could provide answers to a mystery left unsolved for twenty years. More importantly, they might even unravel the greatest mystery of all — how every so often someone will accept you for who you are.

I haven’t really read many road trip novels, but I decided to jump into this one because it contains just a little touch of the paranormal. I’m glad I did, because this book was pretty enjoyable.

Jack is a 17 year old who has dreams of his band making it big. One day while hanging out at the local music shop, a certain old battered guitar catches Jack’s attention. When he picks it up, he’s suddenly hit with a vision of a woman on stage playing a show. And the weirdness doesn’t stop there–at night he’s awakened by a ghostly man standing in his room.

Jack decides to bring up his experiences to Lauren, the school’s loner and outcast. She tells him that she’s had these sort of psychic occurrences too, and that all these things are happening to him for a reason. Before long, Jack and Lauren are on a road trip that leads them to meet very unique people and eventually lead them across the country.

I definitely got sucked into Streetlights quickly. In the first chapter Jack starts having his “visions”, and after he hooks up with Lauren the ball really starts rolling.

Lauren is my favorite character in the story, even though it is told in first person from Jack’s point of view. It’s not that Jack is exactly unlikable, it’s just that Lauren’s personality is so much bigger that it kind of takes over the novel.

Lauren and Jack have an easy chemistry, and their relationship develops nicely with no insta-love at all. They become friends, slowly, and towards the end they share more with each other because they have been through such a unique bonding adventure together.

The only problem I had at all with this book is that it seemed some plot point could have been wrapped up much more easily than they were. I guess I’m just a practical thinker, but I felt like a lot of the questions they needed to ask could have been done over the phone. But I suppose that wouldn’t have made for a very good book 🙂

The end reveals a pretty sweet surprise ending that I definitely didn’t see coming. I wish I could have seen more about the repercussions of what Jack and Lauren did, and how what they found out affected their lives. I recommend this book to any reader who loves a road trip novel or a good, clean read. 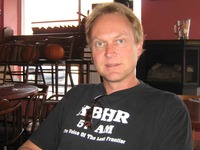 David Pandolfe is the author of two novels, Jump When Ready and Streetlights Like Fireworks. Currently, he’s working on a sequel to Jump When Ready, to be published in 2014. His short fiction has also appeared in literary reviews.

While he’s still writing about himself in third-person, David should probably also mention that he lives outside Richmond, VA, with his wife, two kids and a dog who’s terrified of thunder (not the best situation since it thunders from spring until fall in Richmond).

Enter the tour wide giveaway to win a signed copy of Streetlights Like Fireworks or an iTunes gift card!