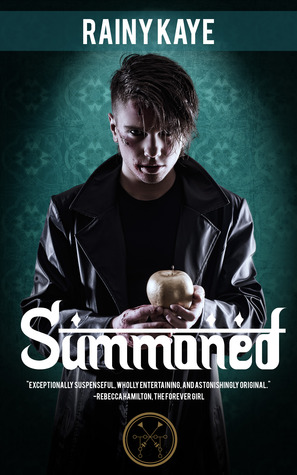 Twenty-three year old Dimitri has to do what he is told—literally. Controlled by a paranormal bond, he is forced to use his wits to fulfill unlimited deadly wishes made by multimillionaire Karl Walker.

Dimitri has no idea how his family line became trapped in the genie bond. He just knows resisting has never ended well. When he meets Syd—assertive, sexy, intelligent Syd—he becomes determined to make her his own. Except Karl has ensured Dimitri can’t tell anyone about the bond, and Syd isn’t the type to tolerate secrets. Then Karl starts sending him away on back-to-back wishes. Unable to balance love and lies, Dimitri sets out to uncover Karl’s ultimate plan and put it to an end. But doing so forces him to confront the one wish he never saw coming—the wish that will destroy him.

A dark twist on genie folklore, SUMMONED follows an unwilling criminal as he unravels the mystery of the paranormal bond controlling his life.

My boots clunk down the stone floor of the mansion hallway. I have my head down, sorting through the papers. My intel does a good job. I have a picture, an address, everything except the target’s baby book. Hell, I could probably get that too, if I asked.
But I have all the information I need. The trickiest part will be getting him alone. I could try to find an in with the guy and lure him off somewhere. Click of the trigger and problem solved. Or, I could use brute force and break into his house. Unfortunately, that increases the chances of the first shot fired being at me. Not a big fan of that idea.
See, most people won’t shoot to kill. They’ll take out a knee or something. Personally, I would rather die than what happens if I don’t fulfill a wish.
Failure isn’t an option. Not for as long as I’m still breathing.
A familiar voice says my name.
I look up from the papers in my hand and stop short.
Silvia is standing at the hall doorway, twirling her crimped black locks and eying me up and down. She does that a lot. It’s unnerving.
“Daddy sending you on another mission?”
“Yeah. Wanna take this one?” I offer the papers and envelope as I head toward her.
She laughs, but it’s also unnerving. Everything about her is unsettling, ever since we were kids.
She pops her gum. “Afraid not.”
I push past her into the foyer, passing underneath one of the two massive white staircases, and head toward a set of exit doors.
“Dimitri?”
I glance back. She has her head tilted, still running her eyes up and down like she’s grooming me in her head. She probably is.
She smiles. “Don’t waste my inheritance, okay?”
I scoff to hide the shudder, then let myself out. I expect Silvia to follow, but she remains inside where she belongs.
A white Honda Civic is waiting in the carport, engine idling. Low key. That’s how I roll.
I slide in, drop the file into the passenger seat, and pull out to head toward Phoenix.
Her inheritance. That’s what Silvia calls me.
If Karl thinks of me as his guard dog, then Silvia considers me her puppy.
And she’s just itching to get her hands on me.

Rainy Kaye is an aspiring overlord. In the mean time, she blogs at RainyoftheDark.com and writes paranormal novels from her lair somewhere in Phoenix, Arizona. When not plotting world domination, she enjoys getting lost around the globe, studying music so she can sing along with symphonic metal bands, and becoming distracted by Twitter (@rainyofthedark). She is represented by Rossano Trentin of TZLA.