← SPOTLIGHT & GIVEAWAY: Skies Like These by Tess Hilmo
SPOTLIGHT: Coexist by Julia Crane →

BOOK TOUR REVIEW: This is the Water by Yannick Murphy

This is the Water 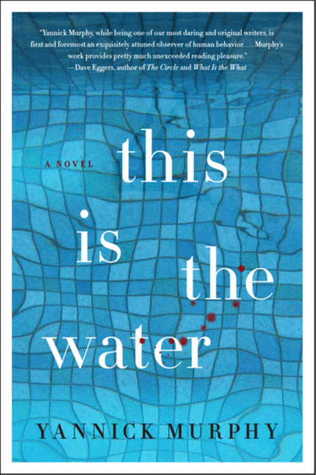 In a quiet New England community members of the swim team and their dedicated parents are preparing for a home meet. The most that Annie, a swim-mom of two girls, has to worry about is whether or not she fed her daughters enough carbs the night before; why her husband, Thomas, hasn’t kissed her in ages; and why she can’t get over the loss of her brother who shot himself a few years ago. But Annie’s world is about to change. From the bleachers, looking down at the swimmers, a dark haired man watches a girl. No one notices him. Annie is busy getting to know Paul, who flirts with Annie despite the fact that he’s married to her friend Chris, and despite Annie’s greying hair and crow’s feet. Chris is busy trying to discover whether or not Paul is really having an affair, and the swimmers are trying to shave milliseconds off their race times by squeezing themselves into skin-tight bathing suits and visualizing themselves winning their races.

But when a girl on the team is murdered at a nearby highway rest stop-the same rest stop where Paul made a gruesome discovery years ago-the parents suddenly find themselves adrift. Paul turns to Annie for comfort. Annie finds herself falling in love. Chris becomes obsessed with unmasking the killer.

With a serial killer now too close for comfort, Annie and her fellow swim-parents must make choices about where their loyalties lie. As a series of startling events unfold, Annie discovers what it means to follow your intuition, even if love, as well as lives, could be lost.

This Is the Water by Yannick Murphy

It takes a little while to get into the style of this novel; the story is oddly told in second person and in the present tense. While this is something rarely seen in a traditional novel, it makes for a different, and sometimes intense, reading experience. But once I was sucked in to the story, I couldn’t put it down.

Most of the book takes place in or around a swimming pool. The main character, Annie, is the mother of two young girls who are competitive swimmers. The man who is the killer spends a lot of time at the pool too, watching the meets and practices and carefully choosing his next victim. While there’s never any mystery as to who the killer is, that doesn’t change the fact that the reader gets chills when getting into his mind and actually seeing him describe committing the murders.

For the most part, I think this book would have been better with the exclusion of several characters and subplots, but the addition of some others. As an example, we do not hear anything about a murdered girl’s parents and their journey through grief, but you see a random swim dad’s thoughts about how his boys are swimming in the practice. This dad never came up again in the rest of the novel, and the paragraphs from his point of view were apropos of nothing. In addition to the cheating subplot, which I felt didn’t add much or develop the story, paragraphs full of swimming jargon and descriptions of nature gave the novel an overall bloated feeling.

Where this book did work was the way that the unique narration style allowed the reader to get into the heads of characters better. In addition to seeing Annie’s neuroses, we see her feelings of rejection from her husband, guilt about how she sometimes treats her daughters, and desire when she’s around the guy she is starting an affair with. Though Annie is the main character, we also see into the mind of the killer, and his matter of fact way of describing things is quite chilling.

As I said, this book is different from the start, and I can tell that it’s one that won’t appeal to all readers. If you can stick with it, I think you’ll be happy with the ending, even though to me it was a bit anticlimactic. This writer has talent, for sure.

Yannick Murphy is the author of The Call; Signed, Mata Hari; Here They Come; and The Sea of Trees, as well as two story collections and several children’s books. She is the recipient of a Whiting Writers’ Award, a National Endowment for the Arts Award, a Chesterfield Screenwriting Award, a Pushcart Prize, and the Laurence L. & Thomas Winship/PEN New England Award. Her work has appeared in The Best American Nonrequired Reading and The O. Henry Prize Stories. She lives in Vermont with her husband and children.

← SPOTLIGHT & GIVEAWAY: Skies Like These by Tess Hilmo
SPOTLIGHT: Coexist by Julia Crane →