← Putting a Twist to Your Classic (and Boring) Office Attire
SPOTLIGHT & GIVEAWAY: Flawed by J.L. Spelbring → 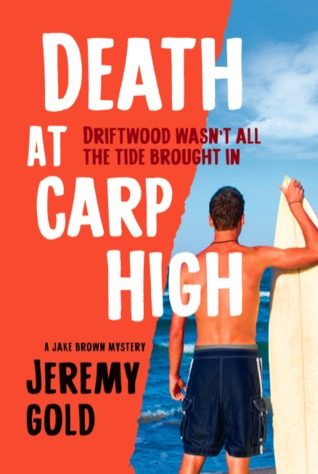 Jake Brown is your average, above-average kid. He generally has his mind on the usual things high school seniors think about: girls, avoiding Spanish class, girls, pizza, surfing, girls, and of course, girls. None of that changes when he and his best friend, Dean, go surfing and find a body with a hole in its head floating beyond the waves. Suddenly, Jake’s life is about to change, some of it in a good way, some of it, not so much.

Shortly after “the big discovery,” Sydney, a cross country teammate of Jake’s, asks him to go to Morp—Prom spelled backwards—a Sadie Hawkins-style dance where the girls ask out the boys. As if life isn’t exciting enough trying to solve a murder, it looks like Jake is about to have his fondest wish granted—a real, live girlfriend. Despite Sydney’s obvious attraction to him, it takes a little work to convince Jake the attraction is real. Luckily, Sydney is very convincing.

In the beginning, Jake and Dean try keeping Lily and Sydney out of harm’s way. Their concern for their girlfriends doesn’t last long. Eventually, the four of them become entangled in clues—and making sure dire threats from their prime suspect don’t pan out. Jake might not say he’s gotten himself into a life-threating situation but not wanting to say it doesn’t make it any less true.

“Death at Carp High” has as many peaks and troughs as a winter swell at Rincon, and it’s all Jake and Dean can do to avoid wiping out.

I’m pretty sure Sandra DeFargo wasn’t wearing any under- wear in homeroom, this morning,” I repeated to Dean. Dean was my best friend.
“How could you tell, Jake?” he asked.
“When I turned around to look at the clock, I noticed she was sitting with her legs slightly apart. She was wearing pantyhose but nothing else.”
“Do girls even wear pantyhose and panties at the same time? Aren’t the panties already built in to the pantyhose? They are called ‘panty’ hose, after all.”
“Good point. The real question is, however, why was she wearing pantyhose to begin with?”
“Nobody wears pantyhose to school.” “I know. So why was she?” “For that matter, why was she wearing a dress?” “Hardly any girls wear dresses.” “Maybe it has to do with some sort of medical condition.” “Like varicose veins.” “Do kids our age even get varicose veins? I thought only
old people got that.”
“It could be an anomaly,” I said. “Or cancer.” “What? Why would having cancer necessitate having to
wear pantyhose?” “Maybe it’s some sort of skin cancer. Maybe her legs would
look really bad without something to cover them up.” “So why wouldn’t she just wear pants?” I wondered out loud. “Exactly. Ninety percent of the girls at school wear pants.
Only the real slutty girls wear dresses.” “Short dresses.” “Sans underwear.” “Maybe Sandra decided to go slutty, all of sudden.” “Pantyhose, though, definitely detract from the slutty look.” “And besides, she’s way too straight to be a slut.” “Which means, you might just have imagined the whole
thing.” “So you’re saying it was just wishful thinking on my part?”
I asked. “That I imagined the whole thing?” “I’m just saying that maybe some part of your subconscious
mind saw what it wanted to see,” Dean said. “It’s possible. Still…it still doesn’t answer why she was wearing
pantyhose to begin with.” “No it doesn’t. And it also doesn’t answer a more funda-
mental question.” “Which is?” I asked. “Why was she sitting with her legs apart?” “Hmm? ” “Exactly. Why weren’t her legs crossed?” “Or pressed together?”
“We’ve already ruled out the whole ‘slut’ angle, right?”
“Right. Sandra DeFargo is not a slut. Too smart, too straight. Too Christian.”
“On the other hand, you know what they say about those Catholic girls.”
“Except we’re not going to a Catholic high school.”
“Which doesn’t mean she couldn’t still be a repressed Catholic, acting out against her priest and parents.”
“You make a good point. Just because she ‘appears’ to be straight, doesn’t mean she actually is. For all we know, she’s having wild sex with different guys every night.”
“Don’t you think we would have heard about it if that were true, though?”
“Probably. But it’s not like we’re part of that crowd.” “The crowd that has wild sex every night?” “Yes. That crowd.” “You think this was a one-time deal or you think she’s,
uh…turned over a new leaf, decided to spice up her life a little bit?” Dean asked.
“You’re suggesting the pantyhose could actually be an attempt to change things up and get laid?” I said.
“Hooking up and getting laid is always a good thing,” Dean reminded me.
“Definitely. Though if she thinks wearing pantyhose is what it’ll take…”
“Dude, it doesn’t take much for a girl to get laid at our school.” “I wish I could say the same for the guys.” “I know what you mean.” “At least you have a girlfriend,” I said.
“Yeah, but we’re not doing it,” Dean said, holding out his hands disappointedly.
“And why exactly is that again?” “The biggest reason is that she’s ‘not ready,’” he said. “And the lesser reason?” “It’s against my religion.” “Oh that’s right…you’re Mormon,” I said, pretending I
hadn’t remembered. “Hard to forget something like that.” “I can imagine it would be,” I said. Unless you knew Dean like I did, you never would have
known that he went to church at least once a week and planned on going on a two-year mission abroad after his first year of college.
“So you’ve finally decided not to have sex before you’re married?” I asked.
“Well…not completely. If the right girl threw herself at me…I might just give in to the temptation.”
“And Lily isn’t ‘temptation’ enough?” I queried. “She’s definitely temptation…” “But she isn’t enough temptation?” I pressed. “Well…given the right circumstances…”
“Like both of you inebriated at a party? Which incidentally is also taboo in the Mormon religion. Drinking alcohol, right? Which, of course, you have freely sampled more than once.”
“I have, haven’t I,” Dean admitted nodding his head.
“So what’s one more sin in the book? You just have to say a few extra Hail Marys, right?”
“We don’t say Hail Marys, dude. Catholics say Hail Marys.”

Jeremy and his wife, Calla, have been married since 1979. Any resemblance between their 21-year-old son, Dan, and Jake Brown is purely…understandable.

Signed copy of Death at Carp High (Open to US and Canada, ends Sept 2nd)

← Putting a Twist to Your Classic (and Boring) Office Attire
SPOTLIGHT & GIVEAWAY: Flawed by J.L. Spelbring →