I Ate a Cicada Today 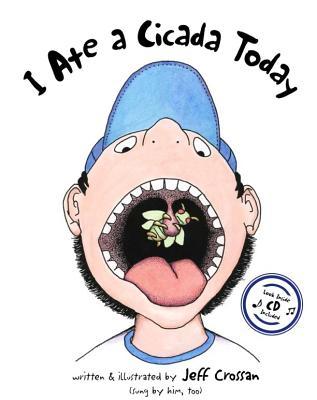 Based on a song of outrageous rhymes, I Ate a Cicada Today is a humorous children’s picture book illustrated in ink and watercolor with an accompanying CD.  Each two-page spread features a verse about a different animal or insect including such fanciful scenarios as “I peppered a leopard today” and “I hid a giant squid today.”  The CD is a guitar/vocal performance of the song by author/illustrator Jeff Crossan, who interjects each verse with a short spoken aside to provide added comic punch to the zany lyrics.

This is a super, super cute book written in verse like a song.  In fact, the version on sale has a CD with it, but I didn’t get to hear this part yet.  The author mixes funny lines about doing weird actions with animals with little tidbits of information about said animal, in a way that kids will remember.

I really liked the illustrations.  They were beautifully done and made the verses really come to life.  My 5 year old thought some of the pictures were really funny without even knowing what the lines were about!

The book is a bit long for bedtime reading, and there are some words you will have to explain the meaning of to your children.  But it seems each set of verses can be a tiny tale all their own.  This is a wildly inventive children’s offering that I think kids and parents will love reading.

Tell us a little about yourself.
Maybe I can answer your first request by telling you about a few firsts relating to my writing background. I grew up in Wilmington, Delaware and the first creative writing effort I recall was done on the back porch of my home there when I was about seven or eight years old. I wrote lyrics to the tune of Stephen Foster’s song “Beautiful Dreamer.” It was titled “Happy That Day.”
The first news article I wrote as a professional reporter was about a newly installed No Left Turn sign on a busy street in Newark, Delaware and how people who’d been making that turn for years were unpleasantly surprised when they were pulled over and ticketed by the local police. The lead was, “Some habits aren’t hard to break. Some habits are. Michael Piovoso has a law-breaking habit.”
The first song I was fortunate enough to have recorded was “You’re Gonna Ruin My Bad Reputation,” a number one record for country singer Ronnie McDowell. I’d love to become that fortunate again.
The first children’s song I wrote was “I Ate a Cicada Today,” which has now turned into my first children’s picture book.

What made you want to become a writer?
I think great writing made me want to become a writer. When I was five years old I heard “Zip-a-Dee-Do-Dah” in the Disney movie “Song of the South,” an Academy Award-winning song, and I wanted to write a song like that. In first grade I read Horton Hatches the Egg by Dr. Suess and it made me want to write and illustrate a children’s book. And today, when I hear a great song or read a great book, I still think to myself, “Why haven’t you written something like that, you slacker?” So I sit right down and write a note to myself to remind me to do that.

Who or what gives you inspiration?
As I just mentioned, sometimes it’s hearing or reading something that inspires me. Other times a cicada slams into my face in a parking lot and launches me into a rhyming frenzy.

Tell us about I Ate a Cicada Today.
The story of how the book evolved over many years is told in detail on its website. But I haven’t spoken much about the song itself, which also changed quite a bit over time. Originally, each verse was only four lines long, three of which were identical. The first verse, for instance, was “I ate a cicada today/I ate a cicada today/It flew in my mouth and it didn’t fly out/I ate a cicada today.” I soon realized that was too repetitive and allowed for a minimal amount of color or information. So I changed the second line to each verse. For the cicada it became, “I know that sounds crazy to say.” Eventually, I realized I wanted to put even more story into the verses so I stopped singing after each third line and added the spoken asides, which opened things up to all sorts of possibilities. Finally, I thought it would add variety to the song if I changed the tempos or time signatures on the verses to reflect the stories being told. The turtle verse, for example, is in waltz time and the hotwired Rottweiler is rock ‘n roll.

What’s the hardest part of being a writer?
Convincing a bank to lend you money. And deadlines. Even the word sounds ominous. When I was a reporter I hated writing under deadline pressure. I’m too much of a perfectionist to be satisfied with a first draft and that was often all I had time to write. Gonzo journalist Hunter S. Thompson said he wrote best under a deadline and likened himself to the rabbit that choses to wait by the side of the road until the headlights are upon him before dashing madly in front of the oncoming car. That’s not me.

What do you need around you to write (special drink, lucky items, etc)?
I don’t need much. A pencil and a pad of paper will do. If I’m writing a song I’ll also need a guitar and a tape recorder. I prefer writing with a pencil to get started rather than a computer. It’s just more comfortable for me. And any posture is possible. I also like to have a large window with a view and plenty of natural light.

What are some of your favorite books?
It’s difficult to choose but if I use the number of times I’ve read a book to gauge where it stands among my favorites I’d have to say, To Kill a Mockingbird, Huckleberry Finn and The Grapes of Wrath. I’ve read each multiple times. When it comes to children’s books I really enjoy Shel Silverstein’s Where the Sidewalk Ends. Of the recent books I’ve read I like Allie Brosh’s Hyperbole and a Half, a unique combination comic book and memoir of sorts, which made me laugh out loud.
Are your characters based on anyone you know?
Most of the characters in I Ate a Cicada Today are animals and although I may have a passing acquaintance with some of them from occasional visits to the zoo I can’t claim to know them well. The little blond-haired boy who appears several times in the book was based on my son, Jon, who I not only know, but love. The little girl is my daughter Sara, who I know and love equally as much as Jon.
What, if anything, are you working on right now?
I have an idea for another children’s picture book based on one of the other children’s songs I’ve written. I haven’t begun working on the illustrations yet but I’ve been giving some thought as to how to best format them. Right now I’m busy doing all the things I need to do to support I Ate a Cicada Today.
Why do you love writing?
I love words and language, description and stories, rhythm and rhyme and everything that writing is. Aside from all that, I also enjoy the solitude that goes hand in hand with writing. I’m an only child and I entertained myself with solitary, creative pursuits a lot when I was a boy. That inclination has stayed with me. 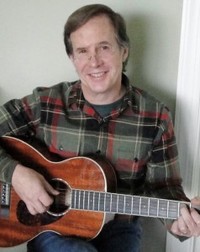 Jeff Crossan is an award-winning, Emmy-nominated songwriter. His hit songs include the number one country tune, “You’re Gonna Ruin My Bad Reputation,” which received a BMI Million Air Award. A graduate of the University of Richmond with a degree in journalism, he is a former newspaper reporter/photographer, music journalist and syndicated radio writer. For several years his cartoons appeared in the Presbyterian Voice. He lives in Franklin, Tennessee with his wife, Linda. They have a daughter and a son who have helped them assemble a fine assortment of mammals, reptiles, fish and insects.

I Ate A Cicada Today is his first children’s book.