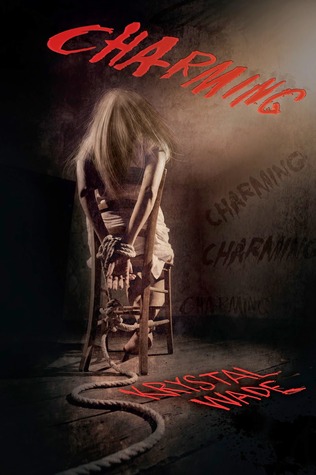 Sixteen-year-old Haley Tremaine had it all: top-notch school, fantastic family, and a bright future, but all of that changed when an accident tore her family apart. Now, an alcoholic father, a bitter younger sister, and a cold headstone bearing her mother’s name are all she has left.

Chris Charming has it all: a powerful CEO for a father, a prestigious school, and a fortune at his fingertips, but none of that matters when he lands a reputation as a troublemaker. Struggling to follow in his father’s footsteps, he reaches out to the one person he believes truly sees him, the one person he wants: Haley.

Little do they know someone’s determined to bring the two together, even if it means murder.

Thirty-two steps until Haley Tremaine entered hell. Thirty-two steps until she walked into the smell of alcohol and burned microwaveable meals, into a place where fear overwhelmed. Fear of whether Dad would go on a rampage and hit her, or maybe even her little sister Jocelyn, the girl Haley protected at the expense of her sanity, her safety. Even if that sister didn’t appreciate it, or have a clue.
Before Mom died, Haley would have called this home.
But not anymore.
Now? Now, this was definitely hell.
“You punishing your palms with that anger, or are you having a stroke?” Even in the darkness blanketing the empty streets, Haley couldn’t mistake the slight smile toying up the side of Christine’s long, slender face. She walked home with Haley every day after their shifts ended at the Berkshire Candle Company and knew all the horrid details about the broken family life inside the Tremaine household.
Haley unclenched her fists and shook them out, allowing the chilly October air to whisk the sheen of sweat into the night. Nothing more nerve-wracking than going to hell. “Sorry.”
“Since you’ve refused all offers to run away and leave this town behind, you could try this.” Christine took a hit of her thinly wound joint, winked, then held it out for Haley. Like tonight would be any different from the other five hundred times Christine had offered.
“Not happening.” But maybe, just maybe, being high would make walking through the squeaky front door hurt a little less. Maybe the pot would snuff out the anger and fear that burned and spread like uncontrolled wildfires in Haley’s head when Dad yelled, when he grunted disgusting noises because she took too long to clean his mess or get him another beer, and when Jocelyn just sat there and watched.
Dad’s favorite. Dad’s favorite because he thought she chose him instead of Mom the night she decided to leave. Dad didn’t know the truth.
Jocelyn didn’t either.
“Not today, anyway.” Hopefully that day never comes.
“Always helps me get over my issues, but suit yourself.” Tucked into her too-large, red and black flannel jacket, Christine finished off the awful-smelling joint with a shrug, then jogged across the cracked asphalt, hundreds of jagged tar lines holding the road together like band-aids. She forgot to say goodbye. As usual.
Haley stood on the side of the street between the power lines and her yard covered with a thick layer of pine needles and red leaves, the closest thing Deerfield Massachusetts had to a sidewalk. She stared through the yellow glow of the streetlamp Christine ran under, waiting for her to walk into her house. Once she did, Haley jogged up the few steps to her front porch, pulled open the screen door, took a calming breath, then walked in.
No one was waiting. The only greetings she received were sounds of the late-night news reporting the most recent murder, the smell of stale beer, and that ever-unsettling panic in Haley’s chest, the panic that never went away while under the same roof as Dad.
Backpack slung over one shoulder, she ditched her plain black work shoes next to the pile of others by the door and crept through the house that didn’t appreciate anyone creeping around. The worn floorboards rattled with every step, despite Haley’s efforts to place each foot gently in front of the other. She passed the kitchen on her way down the long hallway. The cramped space was a mess of dirty pots and pans sitting and crusting on the stovetop, trash overflowing the can and spilling onto the floor, empty plates scattered on the table. All left for Haley to clean. All left for Haley to worry over.
On the way to her room, Haley paused by the arched opening leading to the den. Dad and Jocelyn sat in each other’s company, watching TV as so many normal families would. But did all those families take advantage of one member? Did they pretend like that member didn’t exist unless they needed help with something? Or was Haley the only lucky one?

Krystal Wade is happily married to the love of her life (don’t gag) and raising three beautiful children in the gorgeous state of Virginia. They live just outside Washington, D.C., and every day she wakes up to find herself stuck in traffic trying to get there.

The horrid commute gives Krystal plenty of time to zone out and think about her characters in full, brilliant details (she’s a safe driver; don’t worry). Stories give her a way to forget about the sometimes smelly strangers sitting next to her on the fifty mile trek into town (she picks up hitchhikers every day. True story. Check out http://www.slug-lines.com if you don’t believe us).

Krystal has been a part of organized hitchhiking for nearly fifteen years, but that’s just one small aspect of her oh-so-large life. When she’s not working, commuting, or chasing after her three children (four if you count the man), you can usually find Krystal outside talking to her chickens like they’re the cutest things in the world (they are), or training her amazing dogs how to herd said chickens (which they love), or curled up on the sofa with a good book (why can’t that be 100% of the time?).

BE SURE TO ENTER THE TOUR WIDE GIVEAWAY TO WIN A KINDLE PAPERWHITE!