SPOTLIGHT & GIVEAWAY: Curse of the Granville Fortune by Kelly Hashway

Curse of the Granville Fortune 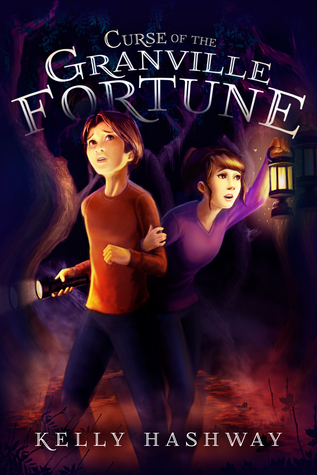 Find the fortune, break the curse!

The hunt is on for an ancient treasure tied to nine-year-old J.B.’s family history. He’s been having visions that make him sweaty, lightheaded, and certain he’s turning into some kind of freak—or worse, going insane. But things are worse than he imagined. The visions stem from a family curse. An ancient ancestor was accused of stealing the massive Granville fortune, and now J.B.’s entirely family will suffer.

To break the curse, J.B. must find and return the Granville’s stolen property. But he’s not the only one searching for the treasure. As he sets out on his journey through a dark and foreboding forest, he’ll battle his worst fears and fight terrifying creatures along the way. And when he meets two others who share the missing pieces of his visions and suffer from the same curse, the three soon realize they need to work together to break the curse before it’s too late.

“What was that?” Holly stepped behind me and buried her head between my shoulder blades.

I was afraid to think of what it might be. I didn’t know if the forest only made the things said out loud come to life or if it could read thoughts, too. I moved the branches of the bush to get a better look. A deer ran through some fallen trees. I let go of the breath I’d been holding.

“Is it bears?” Holly asked.

My whole body tensed. Holly had volunteered another scary suggestion to the forest. I looked around, but I couldn’t see a bear anywhere. Leaves rustled and another cracking sound came from high in a tree. Three large branches fell to the ground in front of us. Only these weren’t normal tree limbs. They were shaped like bears. Big green, leafy bears! Once again, our imaginations had turned the forest into living creatures ready to devour us.

Kelly Hashway grew up reading R.L. Stein’s Fear Street novels and writing stories of her own, so it was no surprise to her family when she majored in English and later obtained a masters degree in English Secondary Education from East Stroudsburg University. After teaching middle school language arts for seven years, Hashway went back to school and focused specifically on writing. She is now the author of three young adult series, one middle grade series, and several picture books. She also writes contemporary romance under the pen name Ashelyn Drake. When she isn’t writing, Hashway works as a freelance editor for small presses as well as for her own list of clients. In her spare time, she enjoys running, traveling, and volunteering with the PTO. Hashway currently resides in Pennsylvania with her husband, daughter, and two pets.