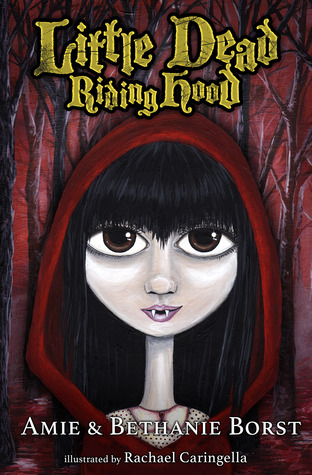 Unlike most kids, Scarlet Small’s problems go far beyond just trying to fit in. She would settle for a normal life, but being twelve years old for an entire century is a real pain in the neck. Plus, her appetite for security guards, house pets and bloody toms (tomato juice) is out of control. So in order to keep their vampire-secret, her parents, Mort and Drac, resort to moving for the hundredth time, despite Scarlet being dead-set against it. Things couldn’t be worse at her new school, either. Not only does she have a strange skeleton-girl as a classmate, but a smelly werewolf is intent on revealing her secret. When she meets Granny—who fills her with cookies, goodies, and treats, and seems to understand her more than anyone—she’s sure things will be different. But with a fork-stabbing incident, a cherry pie massacre, and a town full of crazy people, Scarlet’s O-positive she’ll never live to see another undead day.

Not even her Vampire Rule Book can save her from the mess she’s in. Why can’t she ever just follow the rules?

I do enjoy a GOOD retelling of a story, as they are often hard to get right or have so little to do with the source tale that they are unrecognizable. For the most part, LDRH succeeded as a retelling. But to me, it’s almost as if it could have been two separate stories.

Our little dead riding hood is vampire and unfortunately perpetual sixth grader, Scarlet Small. She has to move often, due to her dad’s military job and the fact that vampires just can’t stay in one place for very long. Just when Scarlet believes she is finding friends and fitting in at this new place, her secret is nearly exposed. It’s then she finds comfort at the home of a kindly old granny in the woods. But are granny–and her sweet treats–all what they seem?

Scarlet is a smart girl, but being a teenager forever does wear on a person. She’s moved around so many times, that she doesn’t really go out of her way to make friends, and she’s actually surprised when someone does act nice to her. Still, even though she’s over 150 years old, she makes some childlike decisions and doesn’t trust her gut when it matters.

The “red riding hood” part of the story doesn’t come into play until well over half the book is done. The first half focuses on Scarlet in school trying to hide her vampire existence, and her relationships with her family and friends. It’s not that this wasn’t interesting, but I think huge chunks of it could have been cut to get to the meat of the story sooner.

I definitely didn’t expect that the granny would be what she was revealed as, though I knew something was up with her. The villain of the story isn’t really explained at the end, and I wish that part would have been fleshed out more.

The authors have definitely created some original characters and they fit nicely into the fairy tale world.

Amie Borst still believes in unicorns, uses glitter whenever possible and accessorizes in pink. She enjoys eating chocolate while writing and keeps a well-stocked stash hidden away from her family. A native New Yorker she currently resides in Northern Virginia with her husband, three children and a cute dog named Lily. She wishes she had a hot-pink elevator with carnival lights to travel the world. But for now, her minivan will have to do.

You could win a signed copy of the book!

The author is also hosting a scavenger hunt giveaway all week on her own blog!

Go here to check it out.