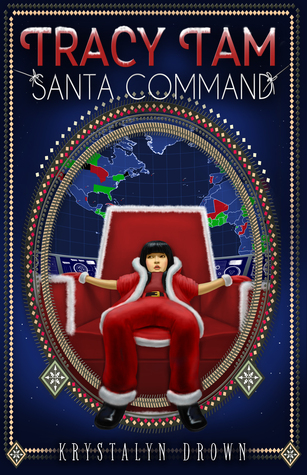 Tracy doesn’t believe that Santa can deliver all of those presents in one night with out a little help from science. A flying sleigh can only be powered by jet engines, and Santa’s magical abilities can only be the result of altered DNA. In order to test her theories, she sneaks onto Santa’s sleigh and ends up at Santa Command, the place where a team of humans monitors Santa’s big night. When Tracy attempts to hack into their computers, she accidentally introduces a virus to their system. As a result, three states get knocked out of sync with the rest of the world. Before the night is over, Tracy has to fix time and help Santa finish his deliveries. And she has to do it all with Santa’s magic, which she doesn’t believe exists.

This was a short and sweet middle grade story that is bursting with Christmas spirit.

The main character, Tracy Tam, is a logical girl who not only believes that Santa isn’t real–she’s going to prove it and make enough money to help her cousin with an operation. But when Tracy sneaks into the back of Santa’s sleigh, she finds that the North Pole isn’t what she expected and nothing is what it seems.

I thought Tracy was a smart, tough girl who was clever but was so single minded she couldn’t see the mistakes she was making. She did come to her senses though, and realizes how she may have been hurting others even when she was trying so hard to help someone she loved.

The Santa mythos is given a cool, unique twist in this book, and that is pretty hard to do. I enjoyed hearing about the original Santa’s backstory and all the magic surrounding him and Christmas.

I think this book will help get young readers into the Christmas spirit in the coming months! 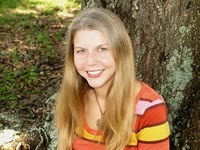 Krystalyn spent thirteen years working at Walt Disney World in a variety of roles: entertainer, talent coordinator, and character captain. Her degree in theatre as well as many, many hours spent in a dance studio, helped with her job there. Her various other day jobs have included working in zoology at Sea World, as an elementary teacher, and currently as a support technician for a website. In the evenings, she does mad writing challenges with her sister, who is also an author. Krystalyn lives near Orlando, Florida with her husband, son, a were cat, and a Yorkie with a Napoleon complex.

Connect with the Author:

Be sure to enter the tour wide giveaway to win one of 5 ebook copies of the book!