A Kingdom at War . . .
Elora, the young princess of the Dark Faeries, plans to overthrow her tyrannical mother, the Dark Queen, and bring equality to faeriekind. All she has to do is convince her mother’s loathed enemy, the Bright Queen, to join her cause. But the Bright Queen demands an offering first: a human boy who is a “young leader of men.”
A Dark Princess In Disguise . . .
To steal a mortal, Elora must become a mortal—at least, by all appearances. And infiltrating a high school is surprisingly easy. When Elora meets Taylor, the seventeen-year-old who’s plotting to overthrow a ruthless bully, she thinks she’s found her offering . . . until she starts to fall in love.

Why I Chose to Write About Faeries

I’ve always loved faeries. Ever since I was a little girl, I’ve been reading stories about the different kinds of fae. Tall, elegant, soulless faeries. Elemental beings who resided in the petals of flowers and the trunks of trees. I read old, epic poems and modern interpretations. I read urban fantasy and magical realism and paranormal romance.  And somewhere along the line, I started to get an idea of what faeries really were—I mean, if they did exist, I started to understand the “who” and the “why” of it.

Their origin story, if you will.

I also started to accept that some faerie stories made more sense to me than others. For example, the idea of faeries-as-elemental-beings resonated with me much more than faeries who didn’t have souls. And, in all of my readings, there was one theory I just couldn’t make sense of no matter how hard I tried: the high faerie courts.

Now, don’t get me wrong; the idea of faerie courts is incredibly compelling. But I never understood the reason for them. If faeries are anarchic, the physical embodiment of nature, why would they need rules? Why would they need courts?

In my idea of Faerie, the creatures are wild, streaking through the trees, eating, dancing, and making love as they please. To me, this was much more exiting than the idea of courts. Certainly, the gowns would be beautiful, but why bind yourself up when you could run naked through the forest? Why sit, with a rigid back and a stony face, in an uncomfortable throne, when you could be diving into icy waters and soaring through the sky? Why confine yourself when you could be free?

These were the questions that raced through my mind as I sat down to write THE LAST CHANGELING. On the one hand, I could’ve just written about these chaotic, free-spirited faeries from the start. But I didn’t want to discard hundreds of years of literature that spoke of faerie courts. I didn’t want to be disrespectful to the mythology. I wanted to understand it.

And so it went. Instead of writing about a faerie realm without courts, I started to ask myself questions: why did the courts come into being? Who did it benefit? Was it a communal decision, or were a few corrupt players pulling the strings? Soon, answers began to blossom in my mind, and my story unfolded. The courts were in place, and I understood the deep, dark secret that led to their creation.

After that, I just needed a faerie who wanted to take them down . . . 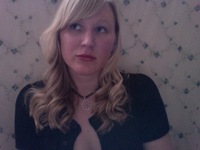 Chelsea Pitcher is a karaoke-singing, ocean-worshipping Oregonian with a penchant for wicked faerie tales. She began gobbling up stories as soon as she could read, and especially enjoys delving into the darker places to see if she can draw out some light. She is also the author ofThe S-Word (Simon and Schuster, 2013).
LINKS:
Website
Twitter
Tumblr
Facebook
PURCHASE :
Amazon

Be sure to enter the tour wide giveaway to win a copy of the book! US/CAN only.