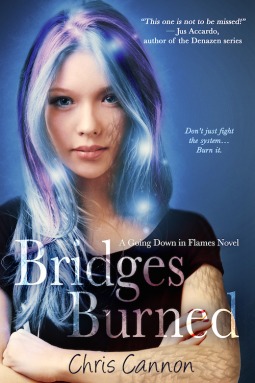 Don’t just fight the system…burn it. Since discovering she is a shape-shifting, fire-breathing dragon on her sixteenth birthday (surprise!), Bryn McKenna’s world has been thrown into chaos. Being a “crossbreed”—part Red dragon and part Blue—means Bryn will never fit in. Not with dragon society. Not with the archaic and controlling Directorate. And definitely not when she has striped hair and a not-so-popular affection for rule-breaking…But sneaking around
with her secret boyfriend, Zavien, gets a whole lot harder when he’s betrothed to someone else. Someone who isn’t a mixed breed and totally forbidden. And for an added complication, it turns out Bryn’s former archnemesis Jaxon Westgate isn’t quite the evil asshat she thought. Now she’s caught between her desire to fit in and a need to set things on fire. Literally. Because if Bryn can’t adapt to the status quo…well, then maybe it’s time for her to change it.
BUY IT ON AMAZON, ITUNES, BARNES AND NOBLE, & KOBO:
http://www.entangledpublishing.com/bridges-burned/
~*~ABOUT CHRIS CANNON~*~

Chris Cannon lives in Southern Illinois with her husband and her three dogs, Pete the shih tzu who sleeps on her desk while she writes, Molly the ever-shedding yellow lab, and Tyson the sandwich-stealing German Shepherd Beagle. She believes coffee is the Elixir of Life. Most evenings after work, you can find her sucking down caffeine and writing fire-breathing paranormal adventures. Going Down In Flames is the first book in Chris Cannon’s shape-shifting dragon series.