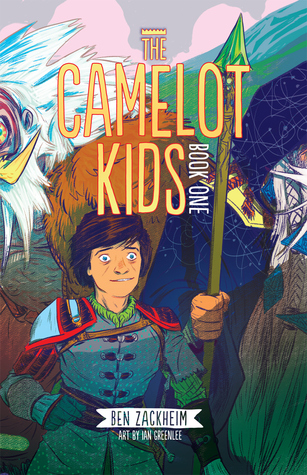 What happens when Merlin tries to save the world with 150 teenage descendants of The Knights of the Round Table?

Luckily, Merlin finds Simon Sharp — a natural leader, but not a big fan of the Camelot myth. In fact, his parents, both obsessed with King Arthur, died in a plane crash on their way to an archaeological dig. So when Merlin tells him that he’s a descendant of Lancelot, King Arthur’s strongest warrior, Simon is skeptical and not receptive in the least. And that’s just the beginning of a story that will leave readers thrilled, wanting more and entirely convinced of the brilliance of Simon Sharp.

In the same way that magic is the code that holds Harry Potter’s world together, chivalry is the code, the foundation and the social dynamic of The Camelot Kids. Chivalry is, in a sense, real-life magic, and it is the real-life code Simon and the other teenagers learn to live by.

The Camelot Kids by Ben Zackheim

Simon is a 14 year old orphan living in New York City. He lost his parents 2 years ago, when their plane crashed on one of their weird quests to find the lost kingdom of Camelot.

When Simon is one day taken in by his curmudgeonly uncle, he discovers that what his parents were searching for did in fact exist…and Simon is a very important part of it. he is quickly thrown into a world filled with trolls, wizards, dragons, and danger at every turn.

While I enjoyed this story for the most part, it took quite a little while to get off the ground for me. The exciting action and Simon learning the truth about himself doesn’t happen for a while, though intriguing things do pop up in the beginning. There are so many questions that don’t get answered until towards the end of this 500 page book.

Simon himself is not my favorite character in the book. He’s so very serious for a 14 year old, and very very skeptical. Though, I guess perhaps I shouldn’t fault an orphan for being this way. I much prefer Simon’s new wizarding friend Maille Rose. She’s smart, fiery, and has a way of doing what she wants no matter what the consequences. They make very complementary friends.

The author does a great job of making the reader feel as if he or she is entering the magical kingdom of New Camelot at the same time Simon is. It’s an enchanting place where both fun and trouble lurk. You also get to know the cast of characters, and either liking or disliking them right away.

At times I had a bit of trouble keeping up with who was fighting whom, who was the enemy, and who was being betrayed. I feel like as an adult this shouldn’t happen to me with a middle grade book, but there you have it. Hopefully the kids to whom this book is targeted won’t feel the same way.

I would be interested in seeing what the future holds for New Camelot, now that the first book has gotten into the heart of the action.