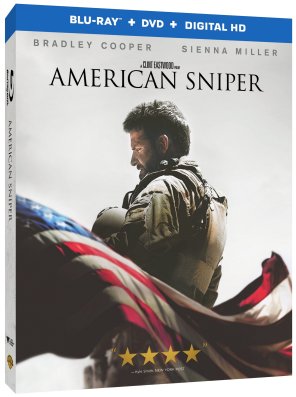 American Sniper took theaters by storm when it was released.  Now, you can own the film on BluRay and DVD–and help out Wounded Warriors in the process.

From director Clint Eastwood comes “American Sniper,” arriving onto Blu-ray Combo Pack, DVD and Digital HD on May 19 from Warner Bros. Home Entertainment in association with Village Roadshow Pictures, A Mad Chance Production, A 22nd & Indiana Production. “American Sniper” stars Bradley Cooper as Chris Kyle, whose skills as a sniper made him a hero on the battlefield. But there was much more to him than his skill as a sharpshooter.

Oscar®-winning filmmaker Clint Eastwood (“Million Dollar Baby,” “Unforgiven”) directed “American Sniper” from a screenplay written by Jason Hall, based on the book by Chris Kyle, with Scott McEwen and Jim DeFelice. The autobiography was a runaway bestseller, spending 18 weeks on the New York Times bestseller list, 13 of those at number one.

“American Sniper” will be available on Blu-ray Combo Pack and includes the film in high definition on Blu-ray disc, a DVD, and a digital version of the movie in Digital HD with UltraViolet. Fans can also own “American Sniper” via purchase from digital retailers.

Warner Bros. Home Entertainment will donate a portion of the proceeds across physical and digital sales to Wounded Warrior Project® (WWP). One dollar of each purchase will be donated up to $1,000,000 from April 21, 2015 through December 31, 2015, void in Alabama, Hawaii, Illinois, Massachusetts, Mississippi and South Carolina. To get involved and learn more, visit http://www.woundedwarriorproject.com.

The mission of Wounded Warrior Project is to honor and empower Wounded Warriors. WWP’s purpose is to raise awareness and to enlist the public’s aid for the needs of injured service members, to help injured servicemen and women aid and assist each other, and to provide unique, direct programs and services to meet their needs. WWP is a national, nonpartisan organization headquartered in Jacksonville, Florida. To learn more about WWP’s life-saving programs and services, please visit http://www.woundedwarriorproject.org/programs.

Thanks to our generous sponsor, one reader will win a copy of the American Sniper Blu-Ray/DVD combo pack.  Please leave a comment letting me know whether or not you’ve seen the film, or your thoughts on it. US only please.  Giveaway ends May 31.