REVIEW: Everything She Forgot by Lisa Ballantyne 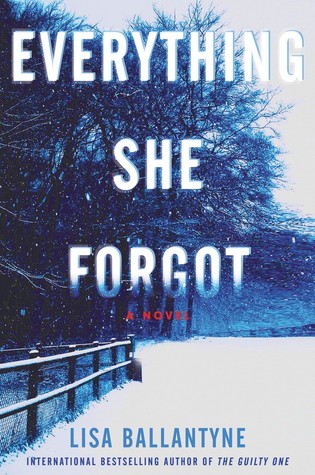 They’re calling it the worst pile-up in London history. Driving home, Margaret Holloway has her mind elsewhere—on a troubled student, her daughter’s acting class, the next day’s meeting—when she’s rear-ended and trapped in the wreckage. Just as she begins to panic, a disfigured stranger pulls her from the car just seconds before it’s engulfed in flames. Then he simply disappears.

Though she escapes with minor injuries, Margaret feels that something’s wrong. She’s having trouble concentrating. Her emotions are running wild. More than that, flashbacks to the crash are also dredging up lost associations from her childhood, fragments of events that were wiped from her memory. Whatever happened, she didn’t merely forget—she chose to forget. And somehow, Margaret knows deep down that it’s got something to do with the man who saved her life.

As Margaret uncovers a mystery with chilling implications for her family and her very identity, Everything She Forgot winds through a riveting dual narrative and asks the question: How far would you go to hide the truth—from yourself…?

Everything She Forgot by Lisa Ballantyne

I suppose this book was marketed as a mystery/thriller, but I saw the plot coming from pretty early on. The best thing about this novel is the rich character development. The author gives you a background on almost all the major players, and it really offers a lot of insight into why these people might act the way they do.

Yes, the plot does involve a kidnapping of sorts–but in how many novels do you actually feel sorry for the kidnapper, and even see him as a kind of hero? The author crafts her characters in such a way that you can’t help but connect to (almost) all of them.

I finished the book quite quickly once I got into it, but it did take me a while to get into it because of all the time, point of view, and location switches. Once the story starts rolling nicely though, it really takes off. Sometimes, when you’re caught up in what was going on with Margaret and George in 1985, it’s a bit annoying to be thrown back into Margaret’s story in 2013.

I truly did love the way the entire novel unfolded. I don’t think there could have been a better ending. I wish I could have seen one particular character get his comeuppance, but in my opinion it was implied that shortly after the events of the book, his life begins to fall apart. My rating of 3.5 is because although I liked the book, some of it was very predictable, and also, I didn’t like being thrown back and forth between time in the way I was. It works for some novels but I found it disjointed in this one.

I would recommend this book to anyone who loves to root for the underdog, and loves an unconventional family story.

Lisa Ballantyne is the author of the Edgar Award-nominated The Guilty One. She spent most of her twenties working and living in China, before returning to the UK in 2002. She lives in Glasgow, Scotland.