← Trendy Home on a Budget
BOOK TOUR REVIEW: Be Frank with Me by Julia Claiborne Johnson →

Disney’s Queen of Katwe & the Unlikely Champions in Life 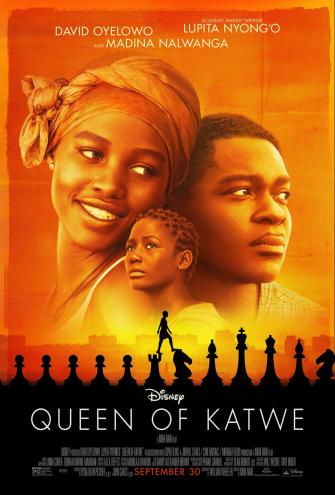 Have you heard about Disney’s heartwarming newest film release?  It’s called Queen of Katwe and will be in theaters September 30, 2016.  I’m happy to share information about the movie today, and tell you a little about an unlikely hero of my own.

Queen of Katwe is based on the vibrant true story of a young girl from the streets of rural Uganda whose world rapidly changes when she is introduced to the game of chess, and, as a result of the support she receives from her family and community, is instilled with the confidence and determination she needs to pursue her dream of becoming an international chess champion. Directed by Mira Nair from a screenplay by William Wheeler, Queen of Katwe is produced by Lydia Dean Pilcher, p.g.a. and John Carls, p.g.a. with Will Weiske and Troy Buder serving as executive producers. The film stars Golden Globe nominee David Oyelowo, Oscar winner and Tony Award nominee Lupita Nyong’o and newcomer Madina Nalwanga.

In the film, a young girl named Phiona becomes an unlikely champion when, through the support of her mother and a local missionary, she learns the game of chess, then excels at it and advances farther than anyone thought possible.  We have all met an unlikely champion in our lives at some point.  I’m lucky to call mine my husband.

My husband, Jared, was first born with some health issues.  He was a sickly baby and then at 7 years old, he was found to have scoliosis.  It was such a severe case that he had to undergo multiple back surgeries just to correct the extreme curves.  He had metal rods implanted and then removed from his spine, as well as staples down the length of his back–this was before the days where laser surgery was routine.  Going into surgery, he was told there was a chance he might not walk again if anything went wrong.  This was at 14 years of age.  After an 8 hour surgery, then 2 weeks of hospital recovery including ICU time, Jared was sent home to recover for a few more months.  When he finally returned to school, he had to wear a back brace–which is always fun for a high school boy who was already on the small side.

My husband made it through all of these struggles wonderfully, and when we first met and started dating, he laid it all out on the line for me–bravely, as if saying, “This is what I am, take me or leave me.”  I loved him for it then and there, and now nearly 12 years and 2 kids later we are still going strong. Jared is a champion because he’s living his everyday best life and providing for us, though sometimes he still experiences pain. He refuses to sit around and let others do for him, or try to portray that he has any disability. He is a hero to our two boys, and to me.

I hope you’re now thinking about your own unlikely champion, and you will take them to go see Queen of Katwe, opening tomorrow!

For more information, visit the Queen of Katwe website.

Posted on September 29, 2016, in Uncategorized. Bookmark the permalink. Leave a comment.

← Trendy Home on a Budget
BOOK TOUR REVIEW: Be Frank with Me by Julia Claiborne Johnson →