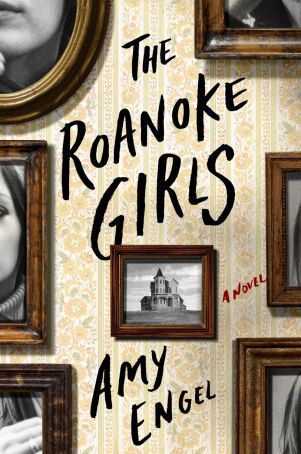 After her mother’s suicide, fifteen year-old Lane Roanoke came to live with her grandparents and fireball cousin, Allegra, on their vast estate in rural Kansas. Lane knew little of her mother’s mysterious family, but she quickly embraced life as one of the rich and beautiful Roanoke girls. But when she discovered the dark truth at the heart of the family, she ran…fast and far away.

Eleven years later, Lane is adrift in Los Angeles when her grandfather calls to tell her Allegra has gone missing. Did she run too? Or something worse? Unable to resist his pleas, Lane returns to help search, and to ease her guilt at having left Allegra behind. Her homecoming may mean a second chance with the boyfriend whose heart she broke that long ago summer. But it also means facing the devastating secret that made her flee, one she may not be strong enough to run from again.

As it weaves between Lane’s first Roanoke summer and her return, The Roanoke Girls shocks and tantalizes, twisting its way through revelation after mesmerizing revelation, exploring the secrets families keep and the fierce and terrible love that both binds them together and rips them apart.

First off, I will say that this review will come with a serious TRIGGER WARNING for many reasons, just a few I will name here: suicide, pedophilia, incest, etc. Do not go starting this book thinking it’s a run of the mill thriller about a missing girl, because it is not.

In Kansas, there is a house where the girls born there, Roanokes, never seem to leave…or if they do, they don’t last long. Lane is the daughter of one of those Roanoke Girls, and though she was raised far away from Kansas, she is forced to go back there after her mother kills herself. Lane joins her cousin Allegra, who was raised in the house by their grandparents, and another orphan.

This book tells the story of one life changing summer in the lives of teenage Allegra and Lane, but also, the current tale of how Lane must go back to the Roanoke House after ten years because Allegra has gone missing. Secrets will be found out, and horrors hidden far too long will come to light even as Lane feels the pull of the house she thought she had escaped on her once again.

I do not want to give away the main “secret” of the plot, but I will say that it’s not really that much of a secret since it’s kind of blurted out around 20 % into the book. Once this comes out, it didn’t take much for me to imagine the rest of the storyline, and as I finished the book, I was right on nearly every prediction I made about what would happen.

Lane is not a particularly likable main character. Even she knows that she’s not a good person, but she goes out of her way to expose her flaws and make herself seem worse than she really is, even as a teenager. For someone who has so much self introspection throughout the novel, she truly does have no sense of how to make herself stop doing the self destructive things that she does.

The other characters in the book weren’t much better. Allegra strings along a guy who’s madly in love with her until she can’t have him anymore; only then does she want him. Everyone else in Roanoke House turns a blind eye to what is happening right in front of their faces, and ultimately I cannot say there was one single person in this book that I liked.

The other main issue that affected my rating of the book is that it’s beyond the scope of believable, unless there are these types of stories somewhere out there and I’ve been living under a rock and not heard them. I cannot believe that THREE different generations of women could be so deeply affected by the same man. I also cannot believe that the people who were not part of the family could accept what was going on.

I’m not sure who I would recommend this book for; but if you decide to give it a shot just know that you’re going into a novel that tries hard to be dark and twisty, but ultimately I just found gross and predictable.

AMY ENGEL is the author of the young adult series The Book of Ivy. A former criminal defense attorney, she lives in Missouri with her family. This is her first novel for adults.

Posted on March 15, 2017, in Uncategorized. Bookmark the permalink. 1 Comment.