← REVIEW & GIVEAWAY: Our Kind of Cruelty by Araminta Hall
Choosing Therapy–The First Step on the Journey to a Better You →

Anna is a student surviving the city, and she lives by a simple credo, “Never play their game; their game is always rigged.” For every man she has ever known, it’s a saying that has served her well.

That all changes on the night of “The Big Storm,” when Anna is slipped a date rape drug. Though she saves herself and her best friend, Anna is lost to the dark heart of the city and finds herself hunted by The Night Collectors. Unsure if these monsters are real or hallucinations, Anna nonetheless fights them as best she can. The battle attracts a stranger—Teej—who saves her using powers she cannot understand. He explains that she is an Undreamer and possesses the same powers, and in the future, he will not be the one to save her. She will save him.

But Anna is not yet ready to join Teej and stand against The Dreamers. She has difficult decisions of her own to make. Decisions she has always run from. She still has her partner’s suicide letter. It remains unopened. She still wears his ring, though she can’t seem to remember his face.

Anna learns of The Dreamers – artists so preeminent in their respective fields that they can paint, dance, sew or sing new realities – and as she travels through their creations, she learns that there’s as much beauty in the world as there is horror. With a complex conspiracy at work within the community of Dreamers that threatens to undermine reality itself, Anna will have to look deep within herself, and eventually have to face the horrors of her own past, to save her old world as well as her new one.

Anna Undreaming is a dark urban fantasy, and the first book in the The Metiks Fade trilogy. 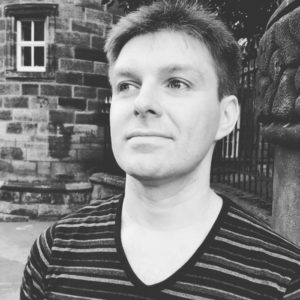 Hi there! My name is Thomas Welsh and my first novel ANNA UNDREAMING is a dark urban fantasy story that was released in March 2018. It is the first entry in the METIKS FADE trilogy. You can buy it here.

I am 37 years old and live in Scotland, and I started writing fiction early last year. I was the winner of the Elbow Room fiction prize for my short story “And Then I was Floating” and I’ve also been published in a few other short story collections, including 404 Ink and Leicester Writes. I received an honourable mention in Glimmer Train’s Very Short Fiction award and my story Suicide Vending Machine will soon be featured on the Pseudopod Podcast.

I have been published in You Died – a book about Dark Souls – and I also write about games, music and film. You can find my work on Kotaku, Unwinnable Magazine and GlitchFreeGame. For my games writing, I was inducted into the fellowship of BAFTA.

1 winner will receive a finished copy of ANNA UNDREAMING. US Only!

← REVIEW & GIVEAWAY: Our Kind of Cruelty by Araminta Hall
Choosing Therapy–The First Step on the Journey to a Better You →