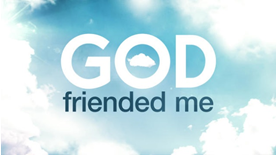 Quick Question:  If GOD asks you to be his FB friend, would you…A) Confirm or B) Ignore His Friend Request

This September, a new and uplifting television series premieres on CBS.  GOD FRIENDED ME is about an outspoken atheist whose life is turned upside down when he receives a friend request on social media from God, and unwittingly becomes an agent of change in the lives and destinies of others around him.

This is an inspirational show about hope, faith, and a question we’ve all asked ourselves – what’s my purpose in this world – how can I be of service to others and be an agent of good?