The Leading Edge of Now

Just when Grace is beginning to get used to being an orphan, her estranged uncle suddenly comes forward to claim her. That might have been okay if he’d spoken to her even once since her father died. Or if moving in with Uncle Rusty didn’t mean returning to New Harbor.

Grace once spent the best summers of her life in New Harbor. Now the place just reminds her of all she’s lost: her best friend, her boyfriend and any memory of the night that changed her forever.

People say the truth will set you free, but Grace isn’t sure about that. Once she starts looking for it, the truth about that night is hard to find — and what happens when her healing hurts the people she cares about the most?

There’s a moment when I do not breathe, when my heart rate goes volcanic, when the distance to Rusty’s house seems so wide and so impassable that it will take me hours to scramble back.
Owen is staring at me, eyebrows crashed together like he’s trying to solve a particularly difficult crossword puzzle. It’s an expression I know well, seeing as how I’ve spent half a lifetime watching him stand in the garage, gazing at his projects as though he were unraveling the greatest mysteries of the universe.
I want to turn around and run.
I want to slap him.
I want to burst into tears.
What I do, though, is stare at him. He looks the same now, only different. While his dusty blond hair has been cut short, his eyes are the same — still clear emerald-green, big and serious, with lashes as long as palm fronds. He’s probably grown a full two inches since I last saw him, and he’s broader across the chest. On his right forearm is the small diagonal scar he got back in the third grade, when he tried to build a birdhouse for an endangered owl. I always considered that scar one of the things that made Owen Owen. But now it looks misplaced, inappropriate. I have to resist the urge to try to scratch it off. I close my eyes, like maybe I can erase his presence that easily. But he smells so familiar — like sawdust and coffee and soap — that this particular action only makes him more real.
I open my eyes again.
Owen plucks the headphones out of his ears. “Grace,” he says slowly, like he’s trying to remember how my name is pronounced.
Now would be the proper time to speak. But I’m pretty sure that my mouth has been blown apart and then reattached backwards and inside out, a couple of miles north of my vocal cords. So I just continue to look at him.
A few decades pass.
I clear my throat. It sounds like an old, brittle floorboard, creaking under bare feet. “You’re here,” I say, which is quite possibly the stupidest thing I could’ve said to him. Twenty-some-odd months of dreaming about getting even, and now all I can do is state the obvious. 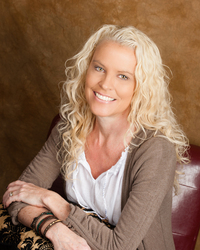 Marci Lyn Curtis is the author of young adult dramedies THE ONE THING and THE LEADING EDGE OF NOW. She lives near Tampa, Florida with her husband. You can find out more about Marci on her website (marcilyncurtis.com), on Twitter (@Marci_Curtis), on Instagram (@marcilyncurtis), or on Facebook (marcilyncurtis).

3 winners will win a finished copy of THE LEADING EDGE OF NOW, US Only.