The Girl on Camera 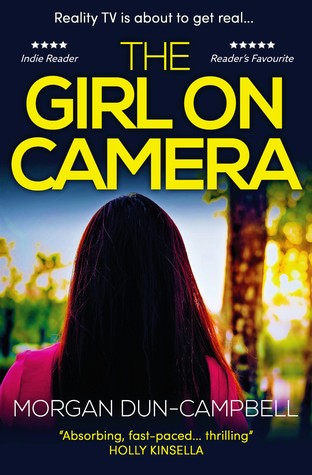 Reality TV is about to get real…

“Are you ready to win the heart of the nation? Compete with seven other contestants for the cash prize? Change your life forever?”

Twenty-six-year old Rory Stevens is thrilled to be selected as one of eight contestants for new reality show: The Retreat.

However, on the second day of filming – during a televised broadcast from the show’s host – all power shuts off with no explanation: leaving the contestants, quite literally, in the dark.

Completely stranded, it is now up to Rory and her seven companions to figure out what is happening.

And then one of them disappears…

For fans of Naomi Alderman, Dave Eggers and John Marrs.

The screen is frozen. There’s a very faint noise, a high-pitched screech, barely audible, that seems to come from the TV.
‘What the hell’s happening?’ Carl cries. Adam looks to him and instantly shhhes him, obviously he can hear the noise too.
We wait a few seconds, each of us holding our positions.
The TV switches off. Completely black screen.
The faint whining noise stops.
All the lights switch off, simultaneously.
Cabin Two, previously bright, is now lit only by the rectangular pools of daylight that come in from the four windows, angled evenly around the room. Even in the afternoon, the room is now surprisingly dark and patterned with shadows.
But it’s too quiet.
Something else has happened.
I realise that we’ve become accustomed to the gentle hum of central heating, the hum from Cabin One, Two, and Three.
But now it is eerily silent, as though The Retreat itself was just a moment ago a living thing, and now it’s died and left us. Something has left us at least, we no longer have the comfort of electricity to rely on, we’re human beings who have been spoilt by laptops and power showers and overhead lighting and central heating and now we’re soft and vulnerable and can’t exist without our twenty first century accessories, in our natural states.
If the power doesn’t come back soon, we’ll be freezing tonight.
Now, an almost suffocating silence.
‘Again,’ Carl says, his voice a whisper, as though we might miss a vital clue. ‘Just what on earth is happening?’
I lean in ever so slightly towards Adam. I clear my throat, and say softly, ‘looks like we’ll have to cancel the leaving party altogether.’

‘Don’t touch me,’ Jess spits at me. I have my hands on her upper arms, stood behind her, trying to both offer comfort and restrain her – last thing we need is her venting her anger on the TV, breaking it somehow, and cutting off our one connection to the outside world.
‘Jess, you need to calm down,’ I say, ‘otherwise you’re going to work yourself up into a state. You have to accept the fact that for the moment at least, it’s out of your hands. He’s there and you’re here. Be reasonable.’ She pulls out of my grip, darts a couple of steps forward and spins on her heels to face us all, the back of her head inches from the TV.
‘Reasonable?’ She repeats. ‘Why am I here?’ She yells at us, her tone accusatory. ‘We don’t know what this place is. We’ve never even heard of this show before. We’re idiots, that’s what. We’ve been had and now we’re stuck here in a prison.’
‘Please, Jess, calm down,’ I say. She starts crying loudly. I note that Adam is studying Jess intently, really letting the weight of her words sink in.
But – Jess is starting to question the validity of the show, and that’s ridiculous. We all went through it.
The auditions. The stay at the hotel. The forms. The limos. The cameras.
That can’t be staged – it just can’t. It’s too complicated.
We’re on national television and we just happen to be the first to try out a brand new show that no one’s ever heard of before, and now all the power has switched off.
… I wish I hadn’t mentally phrased it like that. It makes it sound like madness.
For a brief moment, my mind flickers back to that moment when I clicked on the Apply Now link on my computer screen, blindly trusting this message that had popped into my life out of the blue – no, not from the blue, but from somewhere else, somewhere hidden and secret and suddenly deeply unsettling, now I look around at this dusty cabin, no power, wooden and cold and basic. This does not look like the premise for a televised show in the slightest.
No – of course it is. What about that show Mariah mentioned, Fearless? They’re supposed to be gritty.
‘Jess, the cameras could come on again any minute now,’ Carl says, words gentle, as though she’s a patient in a psychiatric ward who could switch personalities at any moment. ‘Do you really want to be broadcast live to a nation as a crying, irrational state?’ He gestures to Jess, her hair ruffled and sticking up all over the place like she stuck her finger in a wet plug socket, her minimal mascara now running in two lines down her red puffy face.
‘Oh god,’ she says, sniffing and taking a deep gulp. She looks to me. ‘I’m a terrible mother, aren’t I?’
‘What? No,’ I insist. ‘This whole – mess is completely out of your hands. You were left in the dark about anything to do with…’
‘Tony,’ she finishes for me, her eyes glaze over. ‘No, I’m like one of those awful mothers you read about in the papers who leave their baby in the car seat on a hot summer’s day so they can try on that new pair of designer shoes –’ she covers her mouth, eyes wide. ‘What if social services are watching?’
‘Nobody’s watching,’ Mariah says.
It’s at that moment that I spot Freddie.
He’s sat hunched over, huge arms resting on his legs, the elbows propped on the knees, his hands clasped together in a prayer position under his strong chin, an index finger pressed against his bottom lip. He stares at the floor, his lips a thin white line, and his eyes are alive in a way they’ve never been before, with an intensity so strong, I’m surprised he doesn’t have Superman-like vision that’ll burn a hole in the floor.
He’s completely motionless and I’ve never seen him like this. He’s usually animated, watching whoever’s speaking with heightened curiosity like a dog, making sure he’s at the heart of the action.
It’s like he’s switched himself off. Along with the cameras.
‘So… that’s it? Show’s over? Cancelled early for low viewing ratings? What?’ Mariah snaps. ‘I packed my skimpiest, tightest, and coldest wardrobe, so I could die of pneumonia with a bunch of nobodies and get eaten by woodland animals?’ She gestures to her current outfit. White denim shorts, V-neck blue sequinned strappy top, she shivers.
‘There are slightly more pressing matters than a wardrobe malfunction,’ Adam murmurs. Jess is shaking her head, wide eyed, in a state of shock presumably.
‘Let me out,’ she cries.
Nice Guy Freddie gets up.
‘Everyone sit down,’ he says. The words are neutral, but his voice is steady and strong, and this deliverance makes me uneasy.
*
‘So. We’re all in agreement,’ Freddie says, still speaking in his new, blank voice. ‘We all heard about this show from an email.’ Everyone round the circle nods. We’re sat on the sofas.
‘I’ve heard stories like this,’ Lexxi cries, her eyes wide, her knees jiggling, restless as she previously was with excitement, but now that excitement comes from a place of fear. ‘You know. The stuff people agree to online. Meet me behind this dodgy alleyway if you want a part in the new Tom Hanks movie! Then they get thrown into the back of a van, and shipped to the Middle East.’
‘How is that relevant?’ Carl says. He also seems different now the cameras are off. No longer easy-going, he’s now wound tight and stressed. Perhaps fame is more of an addiction for him that he realises. With those cameras off, his chances of being back in the limelight are jeopardised.

Morgan Dun-Campbell lives in London. She has an MA (Distinction) in Creative Writing and Publishing, has participated in two Arvon literary writing courses, and has worked as an intern for numerous publishing houses, including Penguin Random House and Bloomsbury. The Girl on Camera is her first novel.

You can find The Girl on Camera on Goodreads

You can buy The Girl on Camera on Amazon

The winners will receive 5 prize bundles including a signed copy of the book The Girl on Camera, a bookmark, and a small box of Celebrations (UK and US only).